Normally the Polish Bison is found in the East of Poland, but recently one was spotted chilling out in the sun quite far to the West in a place near Stare Kurowo. 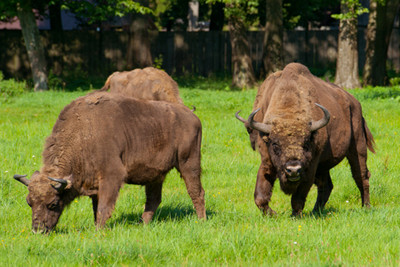 The Polish Bison is known locally as “Żubr” and is an internationally known and iconic critter, probably due to its appearance on bottles of Żubrówka, one of the world’s biggest vodka brands famous for a blade of grass in every bottle.

Best we can tell it was somewhere near Stare Kurowo, roughly halfway between Bydgoszcz and Berlin. Its typical habitat is much further East.

The shy Bison was snapped sitting around by “Bili68” who sent photos and video in to TVN24. Click the image to see the original article (in Polish) with more pictures and video.
The Bison, unaware of its celebrity status, didn’t hang around long after this picture was taken.

Bili68 spoke to a reporter:

It lay quietly in front of my house and enjoyed the Sun. After 15 minutes the animal was no longer there. A dog started barking, and people appeared who wanted to take pictures of it. The bison got scared of something and fled.
I went after it into the forest, but as I saw that something began to move, I did not have any binoculars, I was afraid, because it is a big animal and wild, so I went back to the house.
We see different animals around, but bison?

Anna Malinowska of the National Forests talks of bison behaviour:

Everyone thinks that they live only in the Białowieża Forest, but they migrate, so can be found also in other parts of Poland.
Bisons are not met often, in the same way as a wolf in the woods. You are much more likely to see a wild boar, a roe deer or a deer.
It is known that this is a huge animal, so could act dangerously. You can observe them from a distance, but don’t approach it, don’t try to ride it or take a selfie with it.