His parents did not notice when the 6-year-old boy disappeared from home. The inquisitive little boy set out for a city tour on two wheels. The bike ride ended right in front of the hood of a car. 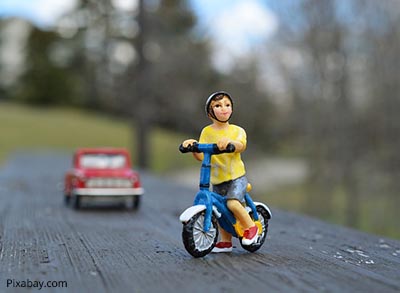 Don’t ride on the streets

A small unattended child on a busy street in Olsztyn. It is not difficult for a tragedy to happen.

On Friday night the Olsztyn police received a report stating that a 6-year-old was riding a bicycle on his own. The child rode onto a street in Olsztyn unawares, just in front of the wheels of a car. This incident was registered by a camera of the urban monitoring.

If not for the driver’s alertness who stopped just in time, the boy could have ended in hospital. This time it only ended in a bit of a fright.

Witnesses of the carefree bicycle rider called the police officers and took care of him until the police arrived. They found out the address of the boy’s residence – says Sgt. Anna Balińska from the Olsztyn police.

Police officers began looking for the parents of the child. When they knocked on the door of their apartment, they quickly found out the parents were intoxicated. The mother of the child explained to the police that during a social meeting she went to a nearby shop, and in her absence the father was to take care of the boy.

Unfortunately, he did not watch him. When the mother returned from the store she noticed that her son was not home. Then they started looking for him. The boy himself rode a few streets on his bike, almost bumping into a car. Thanks to the exemplary civic attitude of the witnesses the child was not harmed – says Balińska.

The boy was handed over to his grandma’s care. And the parents, charged with exposing the child to danger, will answer before court. They may face up to 5 years in prison.