Because of very high temperatures this summer, the Vistula’s water level has dropped significantly revealing many treaures. On Thursday, archaeologists showed what they have found in the river bed – fragments of ancient pottery from the period of Sorbian and Przeworsk culture, stone benches from the Poniatowski bridge and a wooden boat called a dugout. 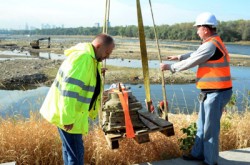 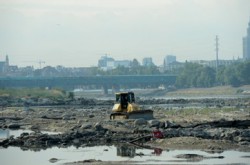 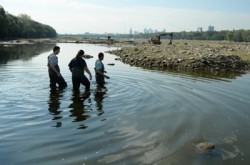 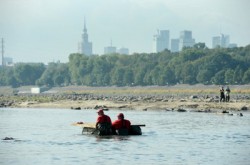 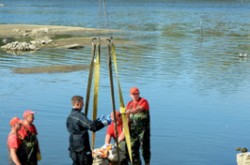 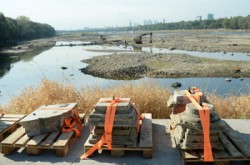 From our point of view, especially important was finding elements of ceramics from the period of ancient Sorbian and Przeworsk cultures exposed on islands near Młociny and clumps in the area of ​​Wilanów. The ceramics, as we determined, are from the Sorbian period approx. 700-400BC, and Przeworsk period approx. 200-100BC – said Ryszard Cędrowski from the Warsaw branch of the Scientific Association of Polish Archaeologists.

The objects were found on the so-called secondary bed, which mean that they were transferred from elsewhere by water. – We found fragments of glass vessels and medieval and modern objects. Among the treasures are also coins – said the archaeologist.

In the waterfront area building elements were also found.

It’s both unfinished parts of quarries, as well as fragments ejected from the rubble after the war. They include lintels and base fragments of columns from different materials, such as sandstone, granite or marble – said Cędrowski.

Archaeologists have found fragments of stone benches from the Poniatowski bridge as well.

As part of the work carried out by Dr Hubert Kowalski elements of seventeenth-century architectural decorations of the Kazimierz Palace stolen during the Swedish invasion (17th century) were also discovered.

Regarding the technical monuments they are mostly remnants of the 19th and 20th centuries, for example maritime objects. They are barge elements, which might come from the pre-war cruise ship called Bajka or from other units, made of metal or wood. Vistula also revealed some iron elements, which could be parts of an old bridge, as we evaluate, among others, the railway bridge by the Citadel. And also, wood piles, which may belong to the old skate Poniński Bridge destroyed during the Kościuszko Uprising. Other piles are probably parts of a temporary bridge built after the liberation in 1945 – enumerated the archaeologist.

Among the findings there is also a frame and wheels of a narrow-gauge carriage, a fragment of a steel pontoon and a wooden boat called a dugout.

Work on the extraction of these other objects was very hard – Kowalski stressed – it’s not like these elements were on the bottom of the river, they had to be dug out from under a metre layer of sand sometimes, so digging was preceded by precise studies with the use of electronics.

Where will the treasures go?

These treasures are priceless, they have great historical value – said Małgorzata Omilanowska, the Minister of culture. On Thursday, along with the mayor of Warsaw, she was viewing the marbles extracted from the river, which were not taken away during the Swedish invasion. – We meet here on the shore certainly not for the last time. Vistula is a capricious river. Over the next years we will extract more objects that the river will reveal – said the Minister.

Mayor of Warsaw has ensured that after all objects are dug out, classified and described by historians, they will be placed in a location where citizens of Warsaw will be able to see them, either in a lapidary by the Royal Castle, or in the Museum of Warsaw, or in the Citadel, where a Museum of the History of Poland is being established.

Especially many artifacts were excavated from the Vistula river bed in September 2012. The water level was then only 58cm. A fountain was found, numerous stone elements of banquet rooms (some with the Vasa emblem), cannonballs, tiles, wooden carriage elements and much more.

Over the past week Vistula has unveiled, among others, a wreck of a ship near Wilanowska street, a mine trolley, which was probably used in the construction of the so called W-Z Route. This year, the record low water level for the first time has allowed archaeologists to carry out research on the waterfront.