Woman found sleeping on scaffolding in Cracow – 11 floors up

A motionless woman was noticed on the 11th storey of a scaffolding in Kraków. First thought: “It’s just another stupid joke!” It turned out she was high both literally and figuratively. 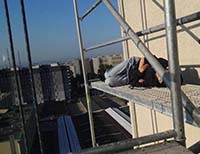 How on earth did she get there?

We thought it was just another stupid joke, – Marcin Warszawski, spokesman for the municipal police in Krakow, commented on the incident. – We have no idea how on earth she got there.

As it turned out later, the woman had both taken drugs and drunk alcohol before she somehow climbed the scaffolding.

A resident reported to us that on one of the scaffoldings, near the blocks of the Kościuszkowskie estate, there was a woman lying. Probably unconscious. A notification more than unusual. We drove there, we thought it was just a stupid joke, but there, as high as at the 11th floor, there really was a person sleeping, – said Warszawski.

“We have no idea how she got there”

Municipal officers decided to check what was happening.

One of them went in to an apartment that was at the same level, he asked the residents if he could use their balcony, and then checked if anyone was really there. And there was: a woman, unconscious and delirious. We called the fire brigade, – reported Warszawski.

One of the officers was keeping an eye on the woman, so that she would not fall from the scaffolding. She was lying on its very edge, about 30 metres above the ground. The other officer was watching the situation from the ground, checking if there was no one else like her on the other storeys.

So far we do not know what happened, how this woman got there. The fire brigade carried the woman down safely using a jib. We handed her over to an ambulance and she was taken to hospital because, as it turned out, she was intoxicated with both drugs and alcohol – added Warszawski.