Why new Warsaw microflats could be a great investment

The 14 to 31sqm flats will be finished and furnished. The investor is a company called Dantex.

Wolska2 in Warsaw is the answer to the needs of customers who want to live in the heart of the city at a reasonable price. Microapartments from 14sqm give the opportunity to start independent living in the capital – say representatives of the developer.

They add that the microapartments are also a way to invest in real estate for rent, and claim that it is an investment with a guaranteed rate of return.

On global markets, mainly in American metropolises, such as New York, and in Europe – in London, it is the residents themselves who started this fashion for microapartments. With a rapidly growing popularity they became a distinct category of real estate. Our Warsaw customers have repeatedly signaled that we need to carry out such an investment in the capital. I am glad that we can fulfill their wishes, starting sales of Wolska2 apartments – says Marek Roefler, CEO of Dantex. 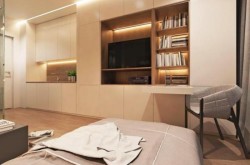 He adds that Warsaw has become an increasingly attractive metropolis, appreciated by both tourists and young people looking for a place to live. This trend is reflected in the preferences in real estate. According to the report Euromonitor International “Top City Destinations Ranking”, which shows the most popular destination for tourists, in 2014 the Polish capital was visited by nearly 4 million people, about 9% more than in previous year. There are here today as many foreign visitors as in Florence or Madrid. On the other hand, YouthfulCities ranking shows that Warsaw is on the 15th place in the world among the best cities for young people, New York being number one.

Residents and tourists want to have all the attractions that the metropolis offers at their fingertips, namely restaurants, cultural events, entertainment, art, and at the same time they value their time and money, so look for small apartments in central locations. Demand for microapartments will also grow rapidly due to demographic factors. According to the Central Statistics Office’s forecast, in the next 20 years the number of single and double households will increase by as much as 20%, accounting for more than 61% of all households – highlights Marek Roefler.

Also for the investor

In the first stage of the project Wolska2 customers will have a choice of 80 units with areas ranging from 14 to 31sqm. Apartments are fully furnished and equipped. There is also a 24-hour reception and underground parking.

SEE ALSO: Beware these 12 traps when apartment hunting in Poland

Wolska2 will be built in Wola, 4km from the centre of Warsaw. Thanks to several bus and tram lines and the new underground line the city centre can be reached in a quarter of an hour. There are four shopping centres and five large parks nearby, such as Sowiński park with the famous amphitheatre and Moczydło park with modern swimming pools, as well as an extensive network of bicycle paths and fitness clubs. Wolska2 is only a 10-minute drive away from the Central Station and 15 minutes from Okęcie airport.

The developer offers investors the possibility of concluding a lease agreement with an operator who will provide comprehensive support for the lease and guarantee 7 percent return on investment per annum.

Price per sqm ranges from 8.5 to 9.9 thousand złoty. The price includes finishing and furnishing.