Last night a dozen masked persons attacked the guests of the Chmury (clouds) club in Praga North in Warsaw. The place was completely demolished. 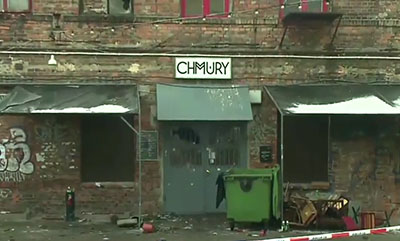 The incident took place on Wednesday, February 15th, at approximately 22.40. Some masked people dressed in dark colours began to throw stones at the club building in 11 Listopada street in Warsaw. According to TVN24 information, no one was injured.

There were broken windows. We received a report of damage of property. The police are analysing the evidence material, verifying the monitoring videos – says officer Iwona Jurkiewicz from the press department of the Metropolitan Police.

Photos from inside the demolished club appeared on social networking sites. “Greetings, the transmission of the Legia Warszawa – Ajax Amsterdam match. Legia won 1 : 0. They f**king demolished the whole Chmury” – says the author of a recording. “They destroyed us, a piece of work and life” – cries a woman seen in a video.

In the comments there was also information that supporters of Ajax Amsterdam lived in a hostel located in the vicinity. “They dropped in for a beer, when, all of a sudden, dear legionnaires*” – we read.

Officially, the police have only confirmed that “there were citizens of the Netherlands in the club.”

The director of media and public relations in Legia Warszawa Seweryn Dmowski wrote on his Twitter:

We receive signals about the incident at the Chmury cafe, we are in contact with the club, we are waiting for confirmed info from law enforcement. Nevertheless, I recall that Legia Warszawa condemns all forms of violence and vandalism, and disassociates from them absolutely. For many (?) we have been working together with state and local authorities and representatives of Ajax so that today’s match is safe.

The Ajax Amsterdam – Legia Warszawa match is tonight in Warsaw.

* – Legioniści (legionnaires) is the name given to Legia Warszawa fans.