Visiting the Elbląg Canal – One of The 7 Wonders of Poland

If you are temporarily living in Poland, or just visiting some friends over summer, you should take the time to explore the natural beauty and tourist attractions of this fascinating country. We have already talked about the beautiful Tatra Mountains, now we will recommend another great place to visit: the Elbląg-Ostróda canal.

One of the Seven Wonders of Poland 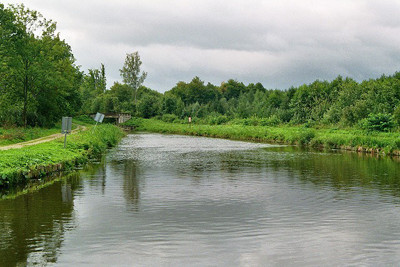 The Elbląg-Ostróda canal is a wonderful and unique example of human talent and engineering taking control over water and disciplining it to create both beauty and function. The canal was built in the 19th century, creating a waterway between the Masurian lakes and the Vistula Lagoon. It is 115.6 km long and represents a special kind of triumph of man over nature.

The purpose of the canal, designed by engineer Georg Jacob Steenke, was to create a dependable trade route between (then) East Prussia and the Baltic Sea. It was a long period of hard work, taking nearly 40 years to build the canal.

So, what is so special about this canal and why should you visit it? It is not just any water canal, with water flowing peacefully to the sea. There is an elevation difference of 100m between the start and end points of the canal, which is quite a challenge for ships and construction engineers even today, let alone in the 1800s.

However, Steenke imagined a unique system of rails and slides, effectively carrying ships in a sort of cradle where the inclines were too steep to allow safe passage in regular conditions. That is an impressive engineering achievement in an era without computers, mechanised lifting and digging mechanisms and many other modern amenities.

From Merchant Ships to Tourist Cruises

Between 1892 and 1927, the canal was used mainly by commercial ships carrying various goods to the Baltic Sea, where they were embarked in larger ships and distributed to the Northern Europe countries and even farther. As various other transportation routes became available, especially the outreaching rail network, the Elbląg-Ostróda canal was no longer a fast and reliable transportation channel.

However in 1927, the ship Konrad, built in Elbląg shipyard, started taking tourists on cruises along the canal, and it was a success. The natural beauty of the landscape combined with the original and ingenious system of rails pulling the ship made it quickly one of the most sought-after tourist destinations in the Ostróda region of Poland.

World War II took its toll upon the wonderful engineering work, however, and many of the devices of the Elbląg-Ostróda canal were destroyed. Nevertheless, the Polish people did not abandon the canal to fall into destruction and be reclaimed by wild nature. By 1947, the reconstruction work was completed, and more tourists could enjoy cruises along the canal.

What You Can Do Now Along the Elbląg-Ostróda Canal

Now that you know the beautiful and complex history of the canal, it’s time to have a look for yourself and enjoy a cruise along it. There are several types of cruises available:

The Boat Cruise Through the Grass

Experience the wonders of hydraulic engineering in a 4.5-hour cruise via the five inclined planes and through the Druzno Lake ornithological reserve. Cruises are available every day in July and August.
The prices of tickets are: standard fare 120 PLN (Polish Zloty), groups 99 PLN per person, children under 4-years old 20 PLN.

Take the time for 2.5 hours of pure enjoyment along the canal with wonderful sightseeing opportunities, the most important of them being the Iława-Ostróda route, known as “Pope’s Route”, because the late pope John Paul II used to visit this attractive waterway, while still being a priest in his native Poland.
Ticket prices: standard fare 69 PLN, groups 59 PLN per person, children under 4 years old 20 PLN.