A Polish man in a rush to take his wife to hospital to have a baby parked illegally. He left a short note about why he didn’t buy his parking ticket and stuck it behind the windscreen of his car, hoping for mercy.

Some kindly soul noticed the letter and bought the ticket for him, leaving the receipt stuck behind one of the wipers.

The photo showing the note and the ticket went viral on the Internet and called immediately for discussion. This is what he wrote: 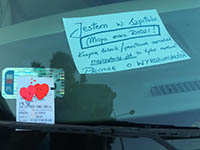 Wife and child above all

Wife in labour above all

You have to have priorities – that’s what the father-to-be must have been thinking when he left the message behind the windscreen. He explained the whole situation clearly, promised he would do justice to the due payment as soon as possible and asked for understanding. But the story wasn’t yet over. Some angel saw the note and decided they would cover the fee. The new father found a receipt stuck behind the windscreen wiper.

The photo of both the note and the ticket was posted on Facebook by Damian Michałowski with a short comment: Poland, you are not yet in short of kindness and good people. This post went viral instantly and caused a great discussion (with over 70,000 likes).

But there’s always a but

The whole situation was greeted with “aww!”s and “cute!”s mostly, since people simply crave for that kind of every-day cheerer-uppers.

Not all of the comments were, however, positive. Some people did not necessarily like the driver’s behaviour and said: “If somebody has time to write such a letter, they should also have time to pay the parking fee” and that the driver deserves “the highest penalty possible”. They were quickly suppressed by others with statements like “some people will just always find a but and keep complaining”.