Szczecin, a busy crossing with a slightly displaced axis has been causing a lot of trouble to drivers. Parts of appropriate road signs were missing and the drivers had no idea whatsoever who’s got the right of way. 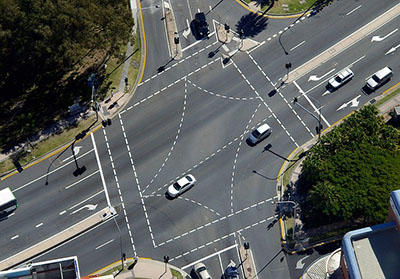 There happened to be a guy, however, who decided he would take the matter into his own hands and add the missing ground markings. Unfortunately for him, the local authorities didn’t consider it as an allusion to what needs to be done there. They find it a destruction of public property and want to punish the daring man.

Now the drivers know how to drive there and the possibility of bumps was reduced but the well-meaning man will probably be captured. The local municipal services claim that this change could have had quite a reverse effect, instead of diminishing the accident occurence it could actually confuse the drivers and cause more bumps there.

The additional markings have already been ground off but you can still see the remainings. According to Szczecin’s municipal services, any further interference could have damaged the road surface. However, the whole process can be done once again after some time soon.

„The case has been reported to the police“, says Hanna Pieczyńska, spokeswoman of Zarząd Dróg i Transportu Miejskiego (local Management of Infrastructure and Public Transportation) in Szczecin.

Both Zarząd Transporu Miejskiego and Wydział Gospodarki Komunalnej i Ochrony Środowiska (Department of Municipal Engineering and Environmental Protection) in Szczecin admitted they were aware that the traffic in this particular area has to be organised in an efficient way and announced the upcomming changes that have supposedly already begun.