A Polish family was harvesting potatoes as is common this time of year. The harvesting machine got clogged so one of them, a 26-year-old woman, tried to clear it out. Something went wrong and the potato-digger ripped the skin off her head. Five surgeons were doing their best to put it back on. 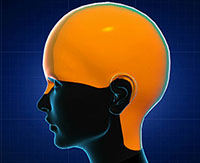 The approximate amount of skin the woman lost

Everything lasted just a few seconds. The woman leaned over the machine and she lost a piece of skin from the eyebrows, across the forehead and down to the neck, including parts of the nose and ears. Luckily, help arrived quickly. After eight hours replantation surgery of the skin began. A team of five surgeons from Gliwice was working for the next eight hours to save the woman’s scalp.

Race against the clock

The woman and her family were harvesting potatoes, using a typical potato-digger. The machine got clogged with weed so the woman leaned over to remove it. The input shaft pulled her hair, even though, according to the eyewitnesses, she had it tied in a bun. Her father, who was driving the tractor, immediately turned off the machine and called an ambulance.

In such dramatic cases the time counts from the very first seconds.

Lędziny, August 2, time 5:26pm: A Medical Air Rescue office receives a call – a 26-year-old got literally scalped by an agricultural machine when working on a field.

5:56pm: A medicopter takes the 26-year-old to hospital. After eight minutes the injured woman is put in a casualty ward of the provincial hospital in Sosnowiec, where her wounds are dressed. Paramedics keep the ripped skin protected in ice water (4 degrees Celsius).

8:00pm: The ambulance takes the 26-year-old to the Oncology Centre in Gliwice – possibly the best place for her, where Prof. Adam Maciejewski and his team specialise in microvascular reconstructive surgery work. The team is recognised worldwide because of their ground-breaking transplants. They have successfully transplanted human face twice.

August 3, time 1:30am: The surgery begins. It’s late, as Prof. Maciejewski states later, because tissues begin to atrophy after just three hours. It’s been eight hours since the accident happened. The surgery lasts another eight. The woman has no skin all over her head down to the neck, no skin on the forehead, the nasal bridge, ears and temples. Fortunately, her scalp is kept in perfect condition. 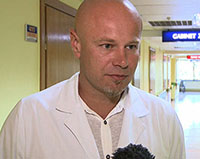 Prof. Adam Maciejewski – the man who saved the woman

Prof. Maciejewski gathered five of his best surgeons, two anaesthetists and four assistant nurses immediately. To restore the circulation on the woman’s head, they take tissues from her forearm. Now, these vessels are used to connect the ripped skin to the remaining tissues on her head. Intricate work – the vessels are extremely tiny, of less than half a millimetre in diameter, but they will allow the blood to circulate in the ripped scalp.

August 6: Critical 72 hours have passed – three days of medical observation and no necrosis, the tissues are active. The 26-year-old’s head will be healing for two weeks, until then the woman’s neck will remain in a cervical collar. She will also need to undergo quite a long rehabilitation due to strained muscles and ligaments of her neck.

The hair will grow back on the patient’s skin, – reassure the doctors.

The 26-year-old is already managing most of her daily activities herself, she can walk and she has already seen her wounds in the mirror. She is glad that she survived and grateful to the doctors that saved her head.