Sweet rolls, sandwiches with mayonnaise and coffee are back in schools. More salt is allowed in the cafeteria meals, more sugar in tea and compote. The Department of Health has confirmed a new menu for schools and kindergartens. The government have once again interfered with the school meal policy, also because of the students’ opinions about the food served at school.

It’s just so bland. I couldn’t find any flavour in it, says Michał.

They won’t drink it without sugar 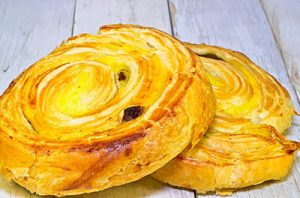 Children can buy a sweet bun for breakfast again

A year ago, the previous government prohibited the school cooks, among others, from using large amounts of salt and sugar.

We would give the children compote without sugar. Some children refused to drink it, so we would give them water instead. Some of the children drank it, but generally most of them poured it out, says Agnieszka Szemberska, head teacher of the kindergarten No. 412 in Warsaw.

The new government, officially for the sake of the children’s taste buds, ordered that the spices and sweets can return to schools. And so, starting from September, the dinner ladies will be able to add sugar to tea or compote. Two teaspoons per cup.

We used to prepare a cocktail. When we added only the allowed amount of sugar the cocktail was tasteless. I added just a little more and it was delicious. The children willingly drank it. You have to put as much sugar as you need, explains Elżbieta Makowiecka, a cook in a kindergarten.

There will also be more salt in the canteen’s pots. The dinner ladies are given a free hand. They can salt as much as they want. Until now, it could only be 5 g per child.

I will not add any more salt. I am going to cook exactly the way I used to, because I belive that salting too much is very unhealthy, says Makowiecka.

The sweet rolls will return to tuck shops. The students are delighted, the dieticians on the other hand, not so much.

I don’t know why everyone likes these sweet buns so much. It’s one of the worst products. White flour, sugar, no dietary fibre. And what is even more important – hydrogenated fat, which contains trans fat acids, which are cancerogenic, explains Hanna Stolińska, a nutritionist at the Institute of Food and Nutrition.

That’s the dietitians’ statement. But I think that a child will be fine if he or she eats a sweet bun once in two weeks, says Szemberska.

The students will also be able to buy coffee in the tuck shops. Sandwiches with mayonnaise will return to shelves as well.

Children are gaining weight, there are more and more obese students, so sauces like that should be used sporadically, explains Stolińska.