The parish priest of Glinojeck (Mazowieckie) decided to comment on women’s latest protest in the parish newsletter, comparing them to ‘Brownshirts’ marches. 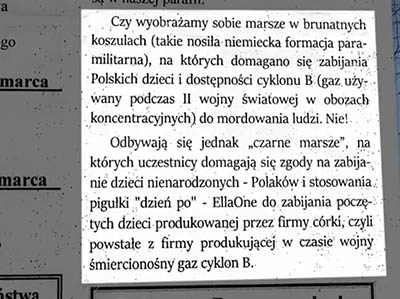 A snippet of the parish newsletter

In the Lenten parish bulletin issue in Glinojeck priest Adam Staniszewski decidedly expressed his mind about the current events and marches of women. Polish women went out on the streets on March 8, protesting against violence, restrictions on access to abortion and in vitro and demonstrating in defense of their freedom and rights.

The content of the latest number of the parish newsletter published and edited by the priest has been sent to Kontakt24 (of TVN).

It says, among others:

Do you imagine marches in brown shirts (such were worn by a German paramilitary formation), which called for the killing of Polish children and the availability of cyclone B (gas used during World War II in concentration camps) to kill people. No!
However, ‘black marches’ are held, where participants demand permission for the killing of unborn children – Poles, and the use of the ‘day after’ pill – EllaOne – to kill unborn children, produced by daughter companies, which were created from the company producing the deadly cyclone B gas during the war.

Concerned about the words of the priest, a few parishioners agreed to talk to TVN reporters, but only under the condition of remaining anonymous. They fear the consequences on the priest’s part.

It definitely is hate speech – says one of the residents of Glinojeck – It builds, strengthens this hatred. The more so because it’s said by a person who has great authority in our society. These are very dangerous words.

We know that our priest is very unforgiving and vengeful – explains another resident of the city – It’s enough to reply to him in some way, then it affects in one way or another our child.

The priest has only explained on the phone what he wanted to convey by making such a controversial comparison.

Killing is killing, that’s what I wanted to say, and nothing more.

When asked how it occurred to him to compare the women’s protests with the Brownshirts, he answered “Well, the colour.”

The Diocese of Płock has already addressed the issue of the newsletter. In a press release the Diocese spokeswoman Dr. Elżbieta Grzybowska notes that “the style of the cited publication, it is not the language, which is used by the Church.” “Such words should not fall from the pulpit or be in the parish newspaper,” – she adds. According to her, the Glinojeck parish priest is to be asked for clarification before the bishop later this week.