Not so enlightened Polish MEP Janusz Korwin-Mikke on Wednesday asserted during a debate on the pay gap between men and women, that women must earn less due to their lower intelligence, weakness and smaller size. The head of the European Parliament Antonio Tajani has commenced investigation regarding the comments. 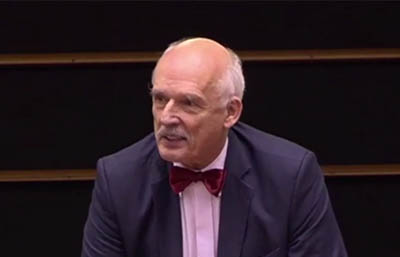 Janusz Korwin-Mikke and his famous fly

The news came from the EU Parliament press service on Thursday, and it’s not the first time Janusz has caused controversy, having in the past made Nazi salutes during debates.

Do you know what the ranking was in the Polish Physic.. theoretical Physics olympiad… the first place of women… of a girls… I can tell you – 800. Do you know how many women are in the first hundred of chess players? I tell you – noone – said Janusz Korwin-Mikke.

He then proceeded to say:

Dear deputy, according to your opinion, I should not have the right to be here, as a deputy. And I know it hurts you… I know that it hurts and bothers you that today we women can represent the citizens with the same rights as you. I come here to defend European women from men like you – she said.

The press service of the European Parliament informed on Thursday that several MEPs alarmed by Korwin-Mikke’s statements reported to Antonio Tajani. The head of the EP decided to initiate a procedure which may end in a financial penalty or even suspension of the deputy in his rights.

Korwin-Mikke has already been held responsible for his controversial statements. In July 2016 he was fined for comparing the Africans coming to Europe to an inundating cesspool.

A year earlier, during the debate on unified public transportation tickets in the EU, Janusz Korwin-Mikke made a Nazi salute, saying: “Ein Reich, ein Volk, ein Ticket” (one Reich, one nation, one ticket).

You can watch the video of Janusz Korwin-Mikke expressing the aforementioned comments on the Socialists and Democrats Group in the EU Parliament Facebook page.