Polish opposition submits motion of no confidence for the govt

The Civic Platform (Platforma Obywatelska) have submitted a motion to the Polish Sejm for a constructive vote of no confidence for the government of Prime Minister Beata Szydło. 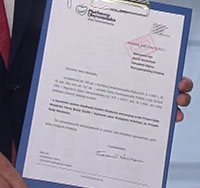 Copy of the motion

Their candidate for the new Prime Minister is party leader Grzegorz Schetyna. PO wants the debate to take place in early April.

We submit (the motion) to the Sejm Marshal, as we announced, after consultations with the opposition parties in the Sejm. Today, this request is formally submitted so that Marshal Marek Kuchciński can run a debate and vote at the next sitting of the Sejm, i.e. between April 5th and 7th – says Sławomir Neumann, chairman of the PO parliamentary club.

Jan Grabiec, PO spokesman, said in an interview with TVN24 that the motion contains a comprehensive analysis of the government, the last 17 months of their work. He added that there are many black characters in the government.

The Civic Platform has also gained support of the motion from the Nowoczesna and PSL (Polish People’s Party) parties. The initiative will not be supported by Kukiz’15.

According to the Polish Constitution, the Sejm passes the motion of no confidence for the Council of Ministers by a majority of votes (at least 231) at the request of at least 46 deputies and naming a candidate for the new Prime Minister. Voting on the motion takes place not earlier than 7 days after submission.

The PiS party has 234 votes in the Sejm in its current term of office.