A 35-year-old Gryfino resident (Zachodniopomorskie voivodship) has been arrested after using petrol to set fire to his girlfriend. Marcin S. faces five years of imprisonment. 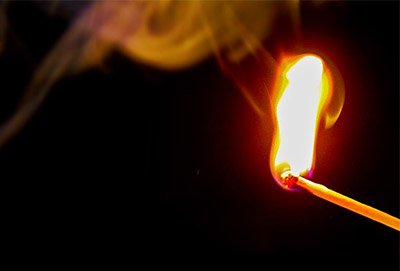 The details of the woman’s nightmare were made public by the police. For many months the man had been abusing her. At first he made fights, then shoved, beat her with his fists, and kicked her whole body with booted shoes.

It was the worst when he drank. Then he would completely lose control. And while the woman’s nightmare lasted since June 2016, she did not want to go to the police.

The situation changed a week ago. Then the drunken boyfriend poured petrol on the woman and set her on fire. Before she could put out the fire, she seriously burnt her legs.

Marcin S. was released on parole from a penitentiary. Previously, he had been charged with trading with stolen goods. He was released in December 2015. He was supervised by a court parole officer and it was the officer who, when talking to Marcin’s neighbours, found out about his abusive behaviour. He immediately notified the police.

The day after the fire incident, police officers from the local Police Headquarters showed up at the door of Marcin’s apartment. However, the injured woman did not want to give her 35-year-old partner away. She lied that her legs were burnt with hot tea.

The policemen did not believe the words of the victim and continued the activities aimed at arresting Marcin S. – reports officer Bogumił Prostak from the Gryfino police.

It was only during the next interview, when the police did not give up, that she told the truth and told about the horror she has experienced.

She admitted how she was treated by her partner. She also confirmed the fact that she had been poured over with petroleum liquid and set on fire by Marcin S. – says officer Prostak.

According to the woman’s testimony, the first time Marcin S. raised his hand on her was in June 2016.

On Wednesday, the Gryfino District Court, at the request of the police and the prosecutor’s office, temporarily arrested the man for a period of 3 months. For the abuse of his partner he faces 5 years of imprisonment.