Polish govt takes over Museum of WWII in Gdańsk

2,000 tickets available for open days of the Museum of the Second World War in Gdańsk were sold out immediately. It may have been the last chance to see the original museum exhibition as it is the subject of a dispute between the museum management, authorities of Gdańsk and the Ministry of Culture. 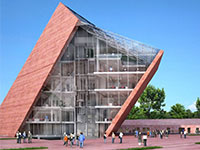 What is the reason for that? Minister of Culture Piotr Gliński at all costs wants to replace the museum management as, according to his party, the current management does not represent the „Polish point of view”. This change will be executed on the 1st of February. It is unknown what will happen with the permanent exhibition.

With the decision of the Ministry of Culture, Museum of the Second World War in Gdańsk will be merged with the Museum of Westerplatte and 1939 War in order to “optimise costs” and to “unlock potential of the institution”.

Minister Gliński, to justify his decision, brings up some historical arguments. According to the minister, the exhibition does not show the Polish point of view and focuses only on a universal narration. The minister also points out the high costs of the museum – the project consumed more than 100 million euro, which is 20 million euro more than it was planned.

The decision about creating the Museum of the Second World War in Gdańsk was made in 2008 by the government of today’s opposition (PO).

Despite the political disagreements, the museum permanent exhibition, which counts thousands of display units, gathered crowds of visitors. It was difficult to find critical voices – journalists and historians agreed that the exhibition is exceptional.

We heard many, maybe too many, good words about our exhibition from historians around the world. – says prof. Rafał Wnuk, Polish historian who works at the museum.

President of Gdańsk Paweł Adamowicz does not deny that the City may claim a return of the parcels donated for the construction of the Museum of the Second World War.