The Polish government has hired Luis Moreno-Ocampo, former chief prosecutor of the International Criminal Court in The Hague. 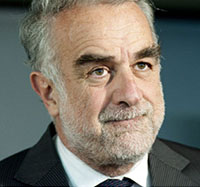 His task will be to attempt to “recover the wreckage of the plane that crashed near Smoleńsk” in 2010. President Lech Kaczyński, his wife and many other politicians, military officers and the plane crew – 96 people in total – died in the crash.

Former Argentinian prosecutor, as well as an international consultant in matters of criminal law – Luis Moreno-Ocampo, was the chief prosecutor of the International Criminal Court in The Hague in the years 2003-2011. “The prosecutor of the world” – as the media called him – was preparing indictments, among others, in connection with crimes against humanity made by the Gaddafi regime and the genocide in Darfur. He was also involved in the case of the conflict in Georgia in 2008.

In an interview with “Dziennik Gazeta Prawna” Moreno-Ocampo said that last week he was invited to cooperate with the Polish government by the defense minister Antoni Macierewicz. His contract is for “an attempt to recover the wreckage of the plane that crashed near Smoleńsk” and “Polish-Russian relations in this particular case,” and provides an “independent and impartial opinion based on international law, which is to lead to a solution to the problem and return of the wreckage.”

The first thing I want to do is to listen to the conversations from the cockpit, the last hour of the flight on 10 April 2010, because as far as I know, there exist different versions of the conversations from the government plane cockpit that crashed in Smoleńsk. One has to perform a scientific analysis of the record to determine what actually happened, who said what, or if indeed anyone entered or not – said the Argentinian.

I think the important thing is that both the Poles and the Russians be in agreement as to what was said in the cockpit. The point is to find common ground for all parties to the case – he added.

Moreno-Ocampo stressed that his work will not have the nature of an investigation.

The former chief prosecutor of the Court in The Hague has indicated that he did not promise success to the Polish governement, only that he will try to help.

I also know that usually one of the victims of this kind of polarisation, divisions, is the truth. That’s why I established with Minister Macierewicz that my contribution to the activities which I have undertaken will be completely impartial. He fully agreed with this. In the agreement between myself and the Polish government the principle of impartiality was taken into account.