The Senate and the Lower Chamber of the Polish Parliament may accept it but it will be a violation of law – evaluated Marek Borowski, independent senator. He was talking about a budget amendment which was supposed to donate 20 million złoty to Father Tadeusz Rydzyk’s school. However, Stanisław Karczewski, the Speaker of the Senate, stated that the senators will only discuss the changes in budget. 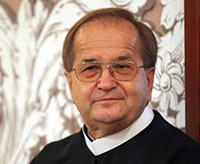 The amendment proposal, thanks to which the Academy of Social and Media Culture in Toruń was supposed to be subsidised with 20 million złoty, came up for the first time on Thursday, in the middle of the Finances Commision work. PiS, however, dropped the idea right before the sitting of the Lower Chamber of the Polish Parliament.

At the same time, the Prime Minister Beata Szydło announced that the amendment will be added by PIS to the budget act.

If it is an amendment prepared according to legal and financial rules, I don’t see any reason for it not to be accepted – said Szydło.

Journalists asked the the Speaker of the Senate, Stanisław Karczewski, about the amendment on Saturday.

I am for supporting all of the prosperous academies in Poland and this one works very well – said Karczewski.

When asked about the details, he answered that “the senators will think about it”. As he said, the senate commisions will work on the budget act of law next week.

According to Marek Borowski, the current law, including the act of law about university education, does not provide for a situation in which private schools will be subsidised by the country.

I’m surprised that the Prime Minister doesn’t know that, nobody told her and generally speaking she publically encourages to break the law – said Borowski, who was a guest on Saturday’s morning programme “Wstajesz i weekend” at TVN24.

I suspect that the Father Director put his foot down. He called where he needed to call, now we have the Prime Minister’s statement, all of this is rather sad – he added. As he said, he thinks that the amendment will be accepted by the Senate and the Lower Chamber of the Polish Parliament but it will be a law violation.

Borowski also commented on the way the Higher Chamber of the Parliament works:

There are less tomfooleries and insults there but it looks basically the same. I mean: all of the people are listened to but the result is known from the beginning.

However, he added that the absolute majority which PiS has, does not make the opposition free of work, even if it’s doomed to fail from the beginning. “We have to tell the Poles what these projects mean, what consequences they carry” – explained Borowski. As he said, the senators have to influence the politicians from the ruling party. “They also need to hear that these projects are bad. Today it doesn’t work but someday some of them may think about it” – he added.

Father Rydzyk is known for his constant support for the ruling party. He is the founder and director of Radio Maryja station and TV Trwam – a catholic TV channel.