On April 10, 2010, in the plane crash of Tu-154M near Smoleńsk all 96 passengers were killed, including Polish President Lech Kaczyński and his wife. The Polish delegation was on their way to join the celebrations of the 70th anniversary of the Katyń massacre. 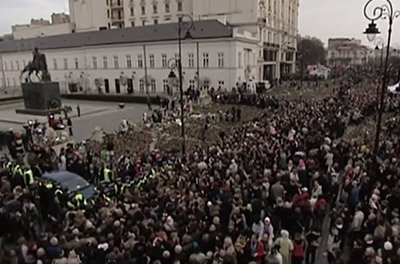 Today, on the seventh anniversary of this tragic event, politicianss and families of the victims, along with many Polish citizens, will commemorate the Smoleńsk flight passengers.

As every year, in the morning on the anniversary of the catastrophe, the graves of President Lech Kaczyński and his wife Maria in the crypt on the Wawel castle will be visited by President Andrzej Duda and the daughter of the presidential couple Marta Kaczyńska. Then there will be a mass celebrated for a small audience.

In the evening, in the Archdiocese Basilica of the Martyrdom of St. John the Baptist there will be a mass for the victims of the Smoleńsk catastrophe. After the mass a Memorial March will pass in front of the presidential Palace. State celebrations will end with the Jasna Góra Appeal and a speech from Jarosław Kaczyński.

Wreaths will also be laid in front of a plaque commemorating the deputies and senators of the Smoleńsk catastrophe and the Sejm Marshal Maciej Płażyński.

At a public meeting scheduled for 3pm in the Military Academy of Technology the subcommittee appointed by the Ministry of Defense to re-examine the Smoleńsk catastrophe, with the head of defense department Antoni Macierewicz, will present their work.

Representatives of political parties: PO, SLD, PSL will visit the graves of the politicians of their parties who died in the crash.

Politicians of the PO (Civic Platform) party have announced they will participate in ceremonies organised by the Warsaw City Hall in the Powązki Military Cemetery and at the Sejm. SLD (Democratic Left Alliance) representatives do not intend to take part in other celebrations commemorating the victims of the Smoleńsk catastrophe other than laying flowers on the graves of their party members. PSL (Polish People’s Party) President and members will visit the graves of their colleagues, “but we remember all the victims of the Smoleńsk catastrophe, including President Lech Kaczyński,” said the head of the party.