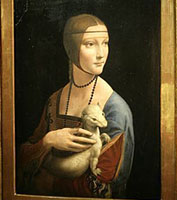 Da Vinci’s Lady with an Ermine purchased by the Polish government.

Polish Ministry of Culture has spent 100 million euros on the art collection of Princes Czartoryski which includes famous Da Vinci’s Lady with an Ermine. According to the Polish government, it was a successful transaction and a historic moment. Nevertheless, experts wonder: was there any sense to buy something that is already in Poland?

At the end of 2016, Czartoryski art collection became the property of the state. For 100 million euros the government purchased over 300 thousand items: objects belonging to Polish aristocracy, portraits, jewellery, military antiques and pieces of Polish kings’ coffins.

Only a fraction of its real value

When Piotr Gliński, Minister of Culture, was signing the agreement with Prince Adam Karol Czartoryski and the Princes Czartoryski Foundation, he admitted that the amount of 100 million euros is only a small fraction of the collection market value. However, Andrzej Starmach, art dealer and historian, points out that discussing the price of something that should not be for sale is impossible.

Was there any sense and necessity to purchase something that was in Poland anyway? – asks Starmach.

One of the reasons for selling the collection may have been the financial problems of the Czartoryski Foundation.

We did not have sufficient funds to renovate the Czartoryski palace. So I think it is the best solution for Poland, Polish nation and foreign tourists. – says Prince Adam Karol Czartoryski.

Not for private collectors

Aristocrat and art collector Jan Lubomirski-Lanckoroński, whose uncle Prince Adam Karol Czartoryski established the foundation in 1991, admitted that, contrary to the controversial rumours, neither Czartoryski nor his future heirs were planning to sell the collection or even individual works of art to any private collectors.

The only possible beneficiary has always been the Polish nation, and it was also the principle of my uncle. – ensures Lubomirski-Lanckoroński.

Therefore, the question arises whether the purchase was necessary. Consequently, the decision of the government has drawn criticism from the opposition.

The ruling party has just given 100 million euro to Mr Czartoryski as a gift. Prawo i Sprawiedliwość (Law and Justice) bought the collection from him in suspicious circumstances, which under Polish law should not be sold. Until now, the collection belonged to a Polish foundation which was obliged to share it with the public. Before this bizarre transaction, absurd rumours had been spread about the threat of selling it to unspecified “sheikhs”. It is absurd as the statute of the Czartoryski Foundation prohibits these kinds of transactions. If it were the case, the state could prevent it easily. – says Adrian Zanberg, a member of Razem (Together), a left-wing political party.