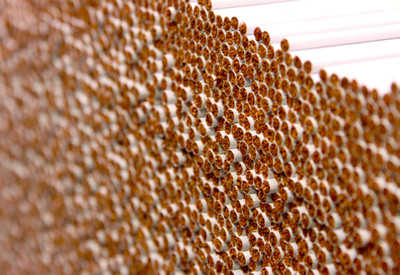 The feds say counterfeit packs cost 80 groszy to make, were sold locally for 4 złoty, and exported and sold illegally in Britain for example, where they would go for around 30 złoty. The equivalent in legal sales means more than a million złoty in lost revenue.

The raid took place in Legionowo near Warsaw. The CBS (Central Bureau of Investigation) officers also found more than a tonne of sugar and tobacco, and 690,000 cigarettes prepared for shipping, boxed, packaged and labelled with forged branding of a major cigarette brand.

See video and more photos of the raid on the CBŚP web site.

The production facility was advanced and well organised, including three separate lines, for the cigarettes themselves, individual boxes, into cartons, all with forged branding. It was installed with professional equipment to commercial standards.

The CBS spent months planning the raid, in order to be sure illegal activities were going on. A dozen armed officers coordinated entry from multiple sides.

Arrested on site, the men were told the illicit production of these goods, threatens up to five years in prison and heavy fines.
– Katarzyna Balcer

This is the fifth illegal factory liquidated this year by officers of the CBS. With the increase of excise duties in January 2014, illegal cigarette production has intensified, and is more likely to lead to confiscations.

The CBS and Police in the past year, have seized nearly 90 million cigarettes, 14 million more than a year earlier. The officers of these teams have raided four large factories and seized dozens of cigarette making machines.

A growing trend in illegal cigarette shipping is also confirmed by border guards. The value of seized, illegal cigarettes has increased in the last year by about 125 percent, users of the production lines also smuggled tobacco. In 2014, the value of the cigarettes was 28.5 million złoty, more than double that of a year earlier.