Prominent Polish artist, director of, among others, “Popiół i Diament” (Ashes and Diamonds), “Kanał” (Sewer) and “Człowiek z marmuru” (Man of Marble) – Andrzej Wajda, passed away on Sunday at the age of 90. 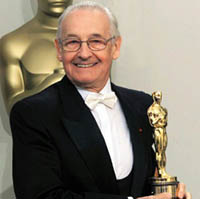 Wajda honoured with an Oscar

When it comes to Polish filmmakers, it was probably just Krzysztof Kieślowski and Andrzej Wajda who managed to earn such a position in the world that they are listed next to Kurosawa, Fellini or Tarkovsky.

In his works Wajda would often reach for the classics of Polish literature. He adapted, among others, “Popioły” (The Ashes) by Stefan Żeromski, “Wesele” (The Wedding) by Stanisław Wyspiański and “Pan Tadeusz” (Sir Thaddeus) by Adam Mickiewicz. He was nominated for an Oscar in the Best Foreign Language Film four times (“Ziemia obiecana” (The Promised Land), “Panny z Wilka” (The Maids of Wilko), “Człowiek z żelaza” (Man of Iron) and “Katyń”). An honorary statuette of the Academy for Lifetime Achievement Wajda received in 2000. His acceptance speech became famous worldwide because Wajda decided to speak in his mother tongue:

Ladies and gentlemen, I am going to say it in Polish because I want to express my thoughts and I always think in Polish. I take this honourable award as a way of appreciating not only what I have done, but what Polish cinematography has achieved. Many of our movies have featured the cruel Nazi times, the misfortune that communism brought to people. That is why I want to thank the American friends of Poland and my compatriots, to whom our country owes its coming back to the democratic family of western civilisation and its safety. I sincerely wish that the fire of great feelings, the fire of love, gratitude and solidarity, was the only fire experienced by humans.

The last movie made by Andrzej Wajda is “Powidoki” (Afterimage) (a candidate to an Oscar). This is a story of Władysław Strzemiński – Polish painter, art theorist, writer, co-creator of the Łódź Museum of Art, who resisted the socialist realism. Andrzej Wajda was planning to shoot this story already 20 years ago. He confessed he wasn’t mature enough to make the most difficult movie in his whole career until recently:

I made a political movie about an artist, who comes into conflict with the authorities and is expelled from the university on the charge of “failing to respect the standards of the doctrine of socialist realism”. He keeps fighting against the regime to the very end, and is not giving up, despite the misery and humiliation.

Andrzej Wajda was also active when it comes to political events taking place when he was younger, participating, among others, in the advisory committee of Solidarność. He was also a member of the Civic Committee together with Lech Wałęsa, about whom he directed a movie “Wałęsa. Czlowiek z nadziei” (Wałęsa. Man of Hope).

Andrzej Wajda received several titles of doctor honoris causa: at the Jagiellonian University, at the Warsaw University, as well as at the Leon Schiller National Higher School of Film, Television and Theatre in Łódź. He was also awarded with the Order Orła Białego (Order of the White Eagle – Poland’s highest decoration awarded to both civilians and the military for their merits). Wajda was also recognised overseas – he was honoured by the governments of, among others, Bulgaria, France, Italy, Hungary and Japan.

Apart from the Oscar award mentioned above, Andrzej Wajda won also multiple BAFTA (the British Academy of Film and Television Arts) Awards and the César Awards (national film awards of France). Furthermore, he was acknowledged on the festivals in Cannes, Venice, San Sebastian, at the Berlinale and won a great number of prestigious awards at Polish festivals. All this makes him definitely one of the most prominent figures in Polish history and culture.