Polish Border Guard officers have arrested six members of a Polish-Russian criminal group suspected of organising transfers for foreigners from Transcaucasia through Poland to Western Europe. 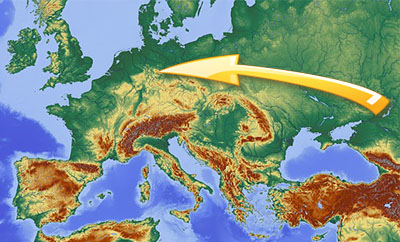 East to West – that’s the dream

Two Russians and four Poles have been arrested in four voivodships: Mazowieckie, Podlaskie, Lubelskie and Zachodniopomorskie, where also several apartments and business premises have been serached.

The spokeswoman of the Vistula Border Guard Dagmara Bielec-Janas informs that the members of the group were recruiting people in Russia and Belarus, and then organised their transfer across the border to Poland and further to Western Europe. The foreigners came from the Transcaucasus region.

The recruited foreigners would appear at a Polish border crossing where they reported willingness to apply for refugee status. Then – according to the procedure – they were sent to open centres for foreigners in Poland.

However, they never got there, because along the way somebody was waiting for them in an agreed place, one of the organisers with transport to transfer them to the West, mainly to Germany, Austria, France, Belgium, the Netherlands or Great Britain – says Bielec-Janas.

In Germany, where the most foreigners were sent, they also reported to a refugee centre, where a new so-called refugee procedure would be initiated. When taking fingerprints German border officers noticed that the same procedure had already been initiated in Poland for the person. It raised their doubts and investigative actions were taken.

From each “client” the smugglers would take a few to about a dozen thousand US dollars or Euros.

The group has been working for at least several months, making this practice a permanent source of income. It is estimated that by acting in this way they could have transferred hundreds of foreigners to the West – says Bielec-Janas.

She adds that officers have also found documents proving the criminal activities of the group and money in different currencies, probably from their illegal transactions.

The detained men have already heard charges of management and participation in an organised criminal group involved in the organisation of illegal migration. They face up to 12 years in prison. By court decision five of the detainees have been arrested.