There are four priorities that must be included in the Rome Declaration for it to make sense. There is an unwritten agreement that if there is no compromise until Friday about the text, there will be no document at all – said Polish Prime Minister Beata Szydło in the “Jeden na Jeden” (“One on one”) TV show. 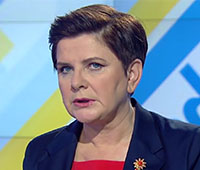 On Friday, the Prime Minister will go to Rome for an EU summit to adopt the Rome Declaration.

In “One on One” Beata Szydło said that the Polish postulates have been consulted with the president of the PiS party Jarosław Kaczyński and President Andrzej Duda.

It is natural for me that the ruling camp, which at the moment is responsible for Poland, for our affairs, is a team game – she said.

The Prime Minister, when asked if Poland could not sign the Rome Declaration, replied:

If the postulates that are a priority for Poland are not included, we will not sign this declaration.

We have informed (Brussels) that four issues must be included for sure. They were also included in the declaration which was adopted in Warsaw by the Visegrad Group. This document was sent to Brussels and also became part of the Rome Declaration – explained the Prime Minister.

She added that it is impossible to say what the Rome Declaration final shape will be, because it is still being worked on.

The unity of the European Union, the defense of close cooperation with NATO, the strengthening of the role of national parliaments and, finally, the principles of the common market, which are not to divide but to connect. These are the four principles which are of prime importance for Poland.

As she pointed out, these four priorities must be included in the Rome Declaration so that it makes sense, and is not merely an empty document that may sound nice, but will not change the policy in the EU.

Further asked if it is possible that the Rome Declaration will not be signed at all, Szydło confirmed:

There were very high hopes for the summit, many thought it would be a breakthrough summit, that it will be the beginning of a new Europe. It would be good if it were, but there is at the moment no such atmosphere in the European Union. In my opinion, the Union is in such a deep crisis, that it is not prepared to make brave decisions.