The 44 year old anaesthetist died while being on duty – she was working four days in a row. The prosecutor’s office points out that the investigation is still in progress and the cause of death can only be confirmed after an autopsy. 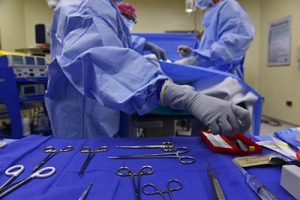 A hospital spokesman confirmed that the doctor had been on duty for four days. How is that possible? She wasn’t a full-time employee at the hospital. She was an independent consultant. Therefore, she was able to work more hours than normally allowed.

She was a contract employee. A civil law contract between a doctor and a hospital states the doctor’s worktime. So technically no laws were broken. But saying that the doctor was working only a few hours a day is a misunderstanding. A doctor, while on duty, always needs to be on the alert and cannot leave the workplace. Besides, every hospital has to care about the patients’ security, so it shouldn’t allow overtired doctors to be working, says Piotr Pawłowski, an attorney who specialises in labour and medical law.

There were also some reports that the doctor had been working for much more than four days. According to some anonymous informants this happens quite often at Polish hospitals. There are not enough specialists, which means that the doctors have to work more hours and don’t have enough time to rest.

This is kind of a loophole in Polish law, because everything happens with the employee’s consent, it is fully legal, working hours are regulated with a contract signed by both sides. But an overworked doctor is not only putting his own health in danger.

There is no proof yet that the 44 year old anaesthetist died because of the extremely long shift. The investigation is still in progress. But there definitely should be some working hours restrictions, even if a doctor is not a full-time employee.