Almost like in an American movie. Nobody saw anything, there’s only a recording from the surveillance camera from a jeweller’s shop in Koszalin, from which four kilograms of gold disappeared yesterday. 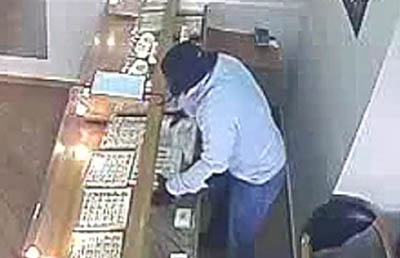 A thief entered the shop, took the jewellery, and went out unnoticed. It was just before 1pm.

The thief took advantage of the couple of minutes when the saleswoman came out of the shop and went to the bank. The woman assures that she closed the door. The “visitor” was registered by a surveillance camera.

On the recording one can see how the man, wearing a black hat covering his face, enters the shop and using a crowbar cracks open jewellery cases. It only takes him a moment to easily open two of them. He quickly packs the valuables in his bag and disappears with four kilos of gold worth about 400,000 zloty.

Police officers are interviewing witnesses. They have already made a description of the thief. He is known to be a broad-shouldered man, dressed in a light-coloured blouse with black patches on the elbows, dark pants and boots, black leather gloves and a dark hat. He had a large black bag with him. After leaving the store he turned towards the train station.

Because the thief managed to break into the jeweller’s in the middle of the day without too much effort, the police suspect he might have had a key.