One caught, one fugitive in last week’s Warsaw xenophobic attacks

On Thursday last week, a professor of the University of Warsaw was attacked on a tram because he was speaking German, and on the weekend a man verbally abused two Asian women in the Warsaw underground. 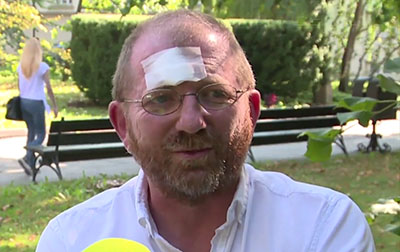 Professor Kochanowski after the attack

Professor Jerzy Kochanowski was travelling by tram talking to his German colleague from Jena. One of the passengers did not like it that they were speaking German.

The professor explained that the incident occurred in a tram near the Powązki cemetary, when he and his German colleague were on their way back from the cemetary. Another passenger asked them not to talk in German. Professor Kochanowski explained that his friend could not speak Polish so they had to speak German. Then he received a head butt and started to bleed heavily. Fortunately, his German friend was not attacked.

In the end, the motorman came and said that we have to fight outside. I said that I wasn’t fighting, I’ve been attacked. It did not cause any reaction. It was shameful. I asked him to call the police, but it turned out that it was also impossible. The motorman’s radio did not work – says the professor.

Only one of the passengers offered to help and gave him a handkerchief. The perpetrator left the tram, and the professor himself called the police. Later, together with the police officers, he tried to find the aggressive passenger. With no effect. The professor was taken to hospital and has five stitches on his forehead.

The police are still looking for the attacker.

Only a couple of days passed, and there was another, this time verbal, xenophobic attack. Two Asian girls had to listen to a man shouting that “Poland is for Poles.”

Maria Cywińska, psychologist and an employee of the University of Warsaw, who witnessed the event in the Warsaw underground, says that the two girls were shouted at, and, because they could not speak Polish, they were very frightened.

I apologised to them, saying that such a thing should not have happened and that I hope that their further stay will be fine – she says.

Another passenger took the girls away from the aggressor, and immediately called the police who came to wait for him at the next station. But it did not end his “performances”. According to Maria Cywińska, he assaulted another woman and her boyfriend. He told the boy that he was not a real Pole and required him to sing or recite the Polish national anthem.

These incidents that keep happening, and that some people believe to be isolated, might not be so isolated in the end – says Cywińska.