Netflix Poland what to watch: 12 quick reviews to get you started

New kid on the (Polish) block, Netflix, is now available, and with a one-month trial it’s worth checking out, even if you don’t really plan to subscribe. But a warning – with no adverts, entirely on-demand, cancel any time, and the convenience of automatically remembering where you were up to, it is addictive.

It streams over the internet, so you will need some form of playback device. It does work through web browsers, and there are apps for most devices out there such as smartphones and game consoles. Many modern TVs have Netflix apps built-in, and there are more custom devices available. Popular in other countries have been Roku, WD Live, and both Amazon Fire and Apple TV devices, but you will need to research what works in Poland. You could even go for a PC-on-a-stick like the Intel Compute Stick with MS Windows. If you think you might want UHD (4K) it’s worth looking for a device that supports it.

If you are just checking it out, all of this is not so important, all you need is a web browser.

Those on UPC Poland’s lowest level of 10Mb/s download speed will be fine up to 1080p HD level streaming. Having said that, UPC are infamous for sharing out your capacity, so contention might be an issue.
Netflix have intelligent buffering which will start shows at low resolution and slowly increase the throughput as it buffers and figures out what your capacity is. You can also manually set your playback bandwidth maximum, down to low-SD, 300MB/hr. It looks like for HD and Ultra-HD (4K) you will need the “premium” level in Poland.

On startup (most) apps present a profile page, where each account user can maintain personal queues, recommendations and viewing progress. Kids can select a special profile with all the adult content filtered out, and a more kid-friendly selection screen, including selection of favourite characters.

Netflix has had a remarkable hit-rate with it’s productions, with not many “flops” to its name. Unfortunately Emmy and Golden Globe winning House of Cards is not among the launch titles so it’s not covered here.
Without further ado, here are a few Netflix-made titles available right now on Netflix Poland to tantalise you.

Orange is the New Black 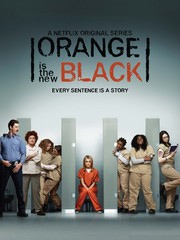 “A privileged New Yorker ends up in a women’s prison when a past crime catches up with her.”
If there are two Netflix titles that outsiders might have heard above all others, it’s multi-Emmy winning Orange is the New Black, and House of Cards (curiously missing, so far).
Cringe as our lead bumbles through her first days in a women’s federal prison, mull over what you would do in her morally conflicting situations, then find that without realising it, you have bought into the scenario, characters and story and have to keep watching. 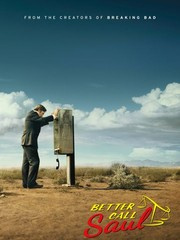 “Before he was Saul Goodman, he was Jimmy McGill. And if you’re calling Jimmy, you’re in real trouble.”
Fans of “Breaking Bad” will instantly recognise Bob Odenkirk as quirky lawyer Saul, or in this prequel, Jimmy. The similarities don’t end there, scenes play out in pace and dialogue as if they were a part of the original Breaking Bad, so if you have been mourning the end of that great series, Better Call Saul will give you immediate respite. Saul is joined by Breaking Bad’s “Mike” (Jonathan Banks) who also has a bit of prequel of his own going on.
Defying belief, due to the mysterious machinations of Netflix, this is available in Poland, but not on the USA and many other countries, so take the rare opportunity to rub it in with foreign friends.
Because they are missing out. Dark, funny, engaging, Jimmy takes us through his beginnings as a poor, bottom-of-the-barrel lawyer, as he gets tempted by less than moral situations. BCS has universally received great ratings, chances are you will love it too. I do. 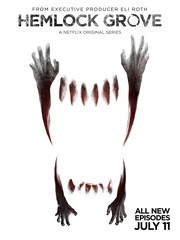 “A quaint town links a mangled corpse to a dark outsider with a carnivorous secret. But monsters come in many forms.”
I must admit, I started watching this with no prior knowledge of even it’s genre. If I had known that it was in the werewolves/vampires genre I probably would have avoided it completely, after the genre pollution from Moonlight and teen pulp of it’s kind.
However, I did start watching it, and found it strangely absorbing. Chaos of a story, interspersed with great action and special effects, nutty characters, three seasons later and I still can’t look away. 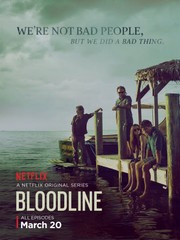 “We’re not bad people, but we did a bad thing.”
After getting used to the mandatory regular-interval eye candy of many of today’s shows, while it does have typical Netflix high production standards, the slow pace of Bloodline might catch you out. Yes, it’s a drama, and if you can get into the long, slow character development and story building of the first few episodes, you will be rewarded at the end of the season. Somewhat.
There is a season 2 coming. 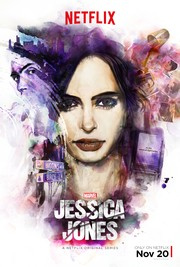 “She’s a gifted PI hiding a past that’s left her broken but still fighting. Revenge might be sweet but she isn’t.”
There is no shortage of comic-book superhero productions, while not all are good, this Marvel spawn is a well-made example of what is possible.
Troubled emo with super strength Jessica is played superbly by Krysten Ritter. Sneer along with her cynical put-downs and enjoy the sass. Interestingly, in this post-interruption advertising age, we start to see more product placement. You may find yourself with a sudden urge to have a shot of Wild Turkey bourbon, or buy yourself an Acer laptop after watching. Gritty, action-packed, if you like the genre, don’t miss it. 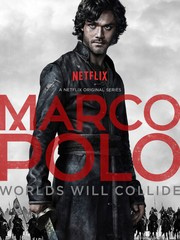 “An empire divided. A family torn apart by civil war. A legend who disrupts the balance of power.”
Marco Polo became famous foremost because of the spend, Netflix having invested $US90 million, second only in dollar terms to “Game of Thrones”. Widely downvoted by critics, but with some loyal fans, really only you can decide. But it’s worth casting your eyes over at least a couple of episodes to see what $90 million can bring.
I enjoyed it overall, with some good story elements, characters and of course outstanding production values. I found myself liking Brit-born actor Benedict Wong as Genghis descendant, Kublai Kahn. Watch as Marco Polo loves, fights, ducks, dives and survives. 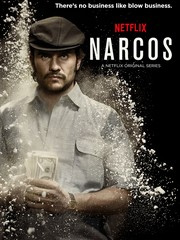 “First they got the coke. Then they got the money. Now the Colombian cartels want the power. Let the drug wars begin.”
Now TV production is getting serious, as Netflix shows us what it’s capable of. If anyone thought that they might not be in the same league as the incumbent TV studios, this show should remove all doubt.
Convincing characters, great acting, high production values, completely absorbing. Wagner Moura as drug lord Pablo Esobar puts on a scary performance. History lessons have never been so good.
The only downside is that there are a lot of subtitles for Spanish conversations, but personally I like it for realism. 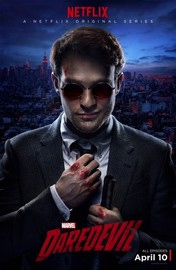 “A boyhood accident blinded him. But now he can ‘see’ even better. And he doesn’t like what’s going on in Hell’s Kitchen.”
In another Marvel re-imagining, Matt Murdoch is played convincingly by Charlie Cox as he and some excellent supporting actors take us through his dark and troublesome journey to becoming a hero. I have to say, for some reason I did not connect so much with this one and was not especially riveted to the screen. Looking at the reviews, it seems I am very much in the minority, so chances are you are going to love it. 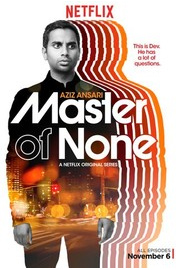 “Dating, career, finding a great taco — it’s all hard. But becoming a mature adult is a whole other degree of difficulty.”
Initially I was not going to include this show as it seems a bit niche to me, but it turns out that according to Metacritic, it is the highest rated Netflix-produced show – among critics – to date with 91/100.
It could equally be called something like, “The Aziz Ansari Show”. I became a fan of Aziz from the excellent Parks and Recreation, so found it enjoyable. However, as it’s pretty much a low-budget serial following the whining first-world problems of a budding actor in New York, the top rating does defy belief, a little. By the end of the season I was frankly a bit bored with the whole premise, but you might not be. Top rated? Go figure.

Netflix have not only be producing their own content from scratch, but have taken ownership of some classics that have been abandoned by their original owners, and continued development. I did want to cover Longmire, The Killing, and Arrested Development, but unfortunately they are not in the Polish edition yet, so it’s just one in this category for now. 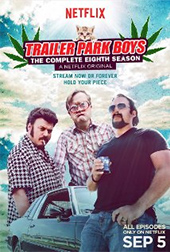 “High times. Lowlifes. These guys scrape by with the least amount of effort and a few visits to the penitentiary.”
This will certainly not appeal to everyone, but I love it, and it has amassed a large cult following. Canadian trailer trash show us the hilarious underbelly of society in 9 seasons of this mockumentary.

Dwarfed by the TV serial production, Netflix does make movies and documentaries too, but it’s a much smaller group. I wanted to cover the E-Team, but again at launch selection is a little limited. 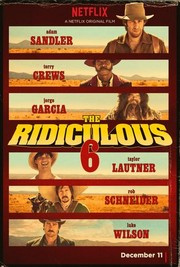 “They’re brothers from a bunch of mothers. And they have some questions for their dad. But first they have to save him.”
Lame yet entertaining for those who are undemanding and don’t mind a bit of slapstick, I didn’t mind it so much. Many will hate it. 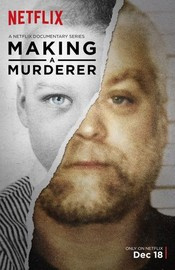 “He served 18 years for a crime he didn’t commit. Now he’s on the line again, and some want to see him put away for good.”
A documentary put together over a 10-year period in 10 episodes about the activities of Steven Avery, this has had massive media coverage and gained a lot of attention from conspiracy theorists.
Prosecutor Ken Kratz accuses the documentary of being a propaganda film produced by the defense as a means to exonerate him, and I can see it’s possible. He told The Wrap:
“It’s a compelling story, it’s edited superbly, and the viewers draw exactly what the filmmakers had hoped … I would come up with the same conclusion when it’s the only evidence that is spoon fed to us.”
Nowhere is there more sensitivity to media and propaganda than Poland right now, so bear in mind whose perspective it is, and watch with a strong dose of cynicism.

Netflix worldwide will be releasing enough of their own newly made material in 2016 to fill 25 days of continuous watching – 600 hours, and most of it will come to Poland.
UPC have every right to be scared based on mass cable cutting in other countries. The one trump card they have – for now – is the Polish language. Unless there is widespread enthusiasm from the average Pole to stream original language content, without dubbing, it’s probably just us ex-pats that will jump initially.

But Netflix has deep pockets, and will be no doubt making it a priority to convert the locals here and in all the other non-English language countries it has recently launched in.

Compared to other countries the launch content for Poland is indeed light with 18% of the TV shows and 12% of the movies available on the US version, but given the high quality of Netflix-made productions, it’s hard to find reasons not to indulge in the free trial, especially during these long cold winter months. And there is plenty of non-Netflix made content in there too (Dexter, Weeds, Archer, Continuum, Breaking Bad).

Just don’t forget to cancel it if you don’t want to continue to avoid auto-renew. The good news is, unlike UPC, cancelling a subscription is made easy, and done online.