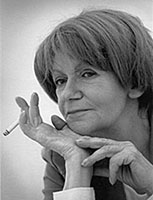 She started her career in 1960 by Polish Radio 1 and moved in 1966 to Polish Radio 3. She was the author of many satirical texts written for famous actors. She ran a series of radio programmes, for example “Bieg przez plotki” (“A run through rumours”) or “Serwus, jestem nerwus” (“Hullo, I’m edgy, bro”).

Czubaszek was also known as a song-writer. She wrote texts, among others, for Andrzej Dąbrowski, Ryszard Poznakowski, Ewa Bem, Grażyna Łobaszewska, Krystyna Prońko, Ryszard Rynkowski and for the band Alibabki. She was the author of lyrics to such hits as “Rycz mała, rycz” or “Wyszłam za mąż – zaraz wracam”, and contributed to screenwriting of Polish top TV series “Na Wspólnej” and “Brzydula” (Polish version of Ugly Betty).

Additionally, Maria Czubaszek wrote her own books: “Pytania tendencyjne i jeszcze jedno” (“Tendentious questions and one more”) and “Dzień dobry, jestem z kobry – czyli jak stracić przjaciół w pół minuty i inne antyporady” (“What’s up, pissflaps? – How to lose friends in half a minute and other anti-advice”). There is another book ready to be published on May, 18: “Nienachalna z urody” (“Unimposing Beauty”).

In 2011, she was nominated in the students’ plebiscite “MediaTory” (students choose best Polish journalists) in the AkumulaTOR category (for the most energetically influential personality). In 2009, she was presented with a Gold Medal of Cultural Contributors Gloria Artis (Złoty Medal Zasłużonych w Kulturze Gloria Artis) by the Minister of Culture and National Heritage, Bogdan Zdrojewski.

Maria Czubaszek was married to Wojciech Karolak – Polish jazzman, pianist, saxophonist and composer. Although their life together wasn’t a bed of roses, they relationship was also described as pure love: they would eventually agree on everything, they would laugh together a lot and they would miss each other whenever one of them was away. They had no kids, as they simply didn’t want one.

What people loved most about Maria Czubaszek was that she could be painfully honest. She will be remembered as a colourful, unique, lovely person who was somewhat incompatible with the world. Czubaszek’s main characteristic was, however, her fantastic sense of humour, the sharp tongue and the frankness in expressing her personal (sometimes extremely controversial) opinions.