A young man attached his sled to a tram and got recorded by his friends. The video was posted on the internet and now he is being tracked by the police. 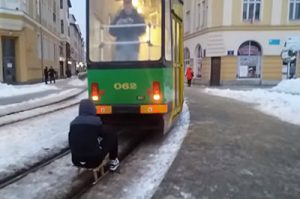 It was a dangerous act, not only for the man himself but also for others

On January 18, in the afternoon, a small group of friends from Elblag decided to go tobogganing. There were three men: two of them recording the videos and, of course, the main character of the story. He attached the sled to a tram, sat on it and enjoyed a free ride.

The police were informed by a reporter of Dziennik Elbląski, who witnessed the situation. The officers quickly learned that videos of the extreme sled ride ended up in the internet.

This is not about punishment, but awareness. There was a second tram coming from the other direction. That was not funny or heroic, but simply stupid, says Krzysztof Nowacki, police spokesman in Elbląg.

All three participants are facing a 500 zł fee for creating a danger for themselves and other participants of the traffic. But police stressed that more important than punishment in making the men realize how dangerous their act was.

Petty offences’ code does not state such an extraordinary offence. But we would like to bring the case before the court, adds Nowacki.

This is not the first situation of this kind in Elbląg. Last year a man jumped on the roof of a bus, rode like this for a few minutes and jumped down as if nothing happened. This reckless recording was posted on the internet as well. The police found the man and punished him with a mandate.
See the video here.