Female prisoners of the German concentration camp in Ravensbruck did not want the world to forget about them. They managed to secretly pass information about the actual life in the camp, and this correspondence has just been donated to the Lublin Museum. 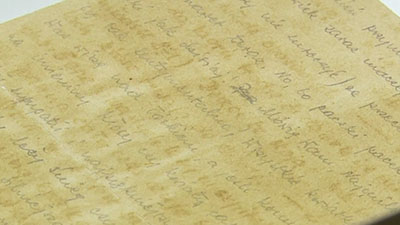 One of Krystyna Czyż’s letters

They felt that since they had been subjected to experiments, they would soon be removed as inconvenient witnesses. Polish female prisoners of the Ravensbruck camp decided to, by all means, find a way to tell the world about their suffering.

It was only possible to send letters from the camp which contained neutral general information. All the correspondence was checked and censored. To provide confidential information about themselves and the situation in the camp the prisoners resorted to deception. They used their own urine, which served them as “ink” that could be concealed from the Nazis.

Sensitive information was written with a thin lime stick on the inner sides of the envelopes, on the back or between the lines of the official letter, which was written in pencil. Recipients of the letters would simply iron them, making the urine text become visible.

There is not only information on the camp, the camp’s operation, transport, food, labour, hard slave labour, executions, but mostly (the letters) contained reports – lists of female prisoners – who were subjected to medical experiments – says Barbara Oratowska of the Lublin Museum “Pod Zegarem” Martyrdom branch.

Legs were incised, infected, then checked how the wounds were healing, I need not mention that these gruesome acts, the criminal medical or pseudo-medical activities gathered a bloody harvest. These women who survived were maimed for life – emphasises Jan Daniluk from World War II Museum in Gdańsk.

Letters to a brother

The brilliant idea to write with urine came to Nina Iwańska and was carried out by Krystyna Czyż who had a beautiful handwriting. They both came from Lublin.

Exceptional intelligence and love of literature did help the women as well. In an official letter to her brother – the first one of the series which announced further hidden messages – Krystyna reminded him of the times they would read together, and of the book “Szatan z siódmej klasy” (Satan from the Seventh Grade) by Kornel Makuszyński (known to most Polish children). The main character of this novel – Adam writes a letter, in which the first letters of each line of text form a secret message. In a similar manner Krystyna encrypted the words “list” (letter) and “mocz” (urine).

Her brother understood the intentions and knew what had to be done. Thus began the secret correspondence.

It was Krystyna’s family who donated 27 letters from the years 1943 and 1944 to the Lublin Museum.

These materials eventually end up in the hands of professionals, have the right to be developed, be subject to maintenance, and then made public. Because it is never enough, especially now that we live in a time when the last witnesses leave, and so this memory must be further cherished – says Jan Daniluk.