Kitesurfer lost at sea for 24hrs rescued by Navy near Gdynia

The story of a missing 30-year-old kitesurfer ended happily last night. The surfer was found by the crew of a hydrographic Navy ship after almost 24 hours in the water. He was weak and cold, but his condition was stable. 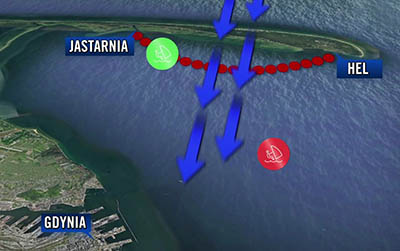 On Monday afternoon the 30-year-old kitesurfer sailed from Jurata in the direction of Hel. The last time he was seen was around 3pm. His friends reported him missing when he didn’t return in the evening.

The rescue operation began immediately afterwards, that is, on Monday after 8pm. The boats of Maritime Search and Rescue Service and a navy helicopter kept looking for the kitesurfer until 1am. On Tuesday morning the operation was resumed. The rescuers found a kite about 10km south from Jurata. The kite had the same colours as the one of the missing man. However, the kitesurfer was nowhere around.

In the afternoon, the crew of a navy hydrographic ship saw a strange object floating in the water.

They got closer and it turned out to be a man. He was freezing, but answering basic questions. At first glance, his life was not in danger. It turned out to be the kitesurfer, whom everyone was seeking. Sailors gave him some tea and informed the SAR, which sent its rapid pontoon for the survivor – says Navy Capt. Przemysław Płonecki, press officer of the 3rd Navy Flotilla.

The kitesurfer spent almost 24 hours in the water, holding on to his board. Fortunately, his surfing suit kept him warm enough.

The man was near the old torpedo station in Gdynia Babie Doły. A little hypothermic, but his condition was stable – says a SAR officer.

The 30-year-old was transported to the shore and there taken care of by an emergency crew. He was taken to hospital, but after a few hours he left it on his own request.

How is it possible that he floated so far away from Jurata?

It is possible. The bay is not a large body of water. You have to take into account the currents, changing wind and general conditions on the water. Yesterday they were decent, today already much worse – says Capt. Płonecki.