An 18-year-old resident of Rome who took part in World Youth Day in Kraków this year, died of meningitis in Vienna on Monday on her way back home. Prophylactic tests were recommended to all people who have had contact with the girl. Preventive measures have also been taken in Poland.

On Tuesday Italian media reported a concern or even “a state of alarm” among the nearly 100,000 pilgrims from their country who had taken part in the WYD, especially those who – like the 18-year-old – were in the same site in Kraków, Casa Italia. Even the Episcopate of Italy appealed to the young participants to register for preventive examinations.

Fear, not yet panic 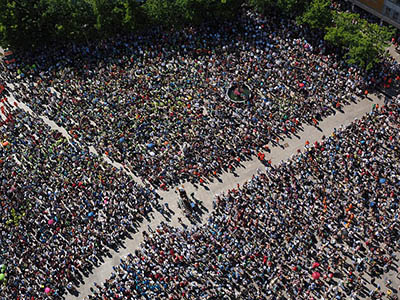 On the night between Monday and Tuesday many pilgrims reported to hospitals in the north of Italy, which means they most certainly were still on their way back home. The Italian Health Care Services explained that prevention does not apply to all the WYD participants. People who admitted having direct contact with the young woman have already been treated with antibiotics. Among this group of more than 120 people, there is the bishop of Bolzano and Bressanone – Ivo Muser.

The Ansa Agency stresses that there are concerns that a “psychosis” might be spreading among the pilgrims. They all were, however, asked to remain calm and anyone who is afraid of being infected is advised to have themselves tested to avoid mass panic.

Information about the death of a young Roman woman reached the Provincial Sanitary-Epidemiological Station in Kraków.

We have implemented preventive measures, knowing that the person had stayed in Poland, lived with a Polish family and spent the last few days among other pilgrims. People with whom she had any direct contact, that is, the host family and pilgrims with whom she was travelling, are being treated with antibiotics already, – said the spokeswoman for Krakow’s Health Inspection Elżbieta Kuras.

She added that prophylactic antibiotic treatment was also prescribed to another group of pilgrims who reported to the Emergency Ward of the University Hospital in Kraków.

The meningococcal infection may have occurred much earlier, and the disease could have activated itself in the patient’s organism only after it was too weak to handle the bacteria, – explained the spokeswoman.

No major cases of any kind of infection were reported during the World Youth Day.