Increasing numbers of Poles addicted to the internet and social media

According to the Centre for Public Opinion Research 100 000 people are e-addicted and another 750 000 are at the verge of addiction. All around the world the problem is so severe that there are pavements for people unable to look away from their mobile phones. In Poland being addicted to technology, internet and social media is still a marginalised issue. 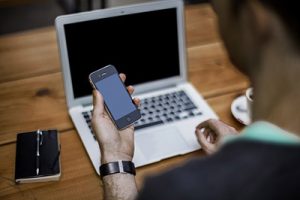 Internet addiction is a severe problem among young people

They walk like zombies. As if only their bodies were present here, their minds seem to be far away from this world, says Robert, a driver from Łódź. There were a few times when he almost knocked over a pedestrian who was mindlessly looking at their phone.

Monika, a teeneger from Łódź, shrugs her shoulders, It is as it is. Everything happens in the web. Even at a party, people sit around and show each other things found in the internet. There is no point to be angry with it, this is just the reality.

However, internet addiction can ruin a person’s life, exactly like any other addiction.

People do not only spend time watching, reading or playing games. They buy a lot of things of course, but not only real ones. They spend thousands buying things in the virtual reality, such as games. The things exist only in the web, but the money you need to pay for them is very real.

According to specialists, the undertow of internet addiction is similar to any other addiction. Unfortunately, the problem is marginalised and often unnoticed, even at schools. Most of them do not have a diagnostic or preventive programme.

Teenagers and young adults are more likely to suffer from internet addiction than any other age group. Also it is easier to get addicted to the web if you have lots of free time or if you are lonely and seek human contact. That is why students, housewives, people living alone and unemployed are more likely to get caught in it.

The addiction starts harmlessly – a lot of people like to spend time surfing the net. However, an addict starts to neglect school or work, sleeps and eats less – only to have more time for the internet.

The Supreme Audit Office has recently appealed to the Health Minister to create procedures that would diagnose and treat people with technology addictions.