Officers of the Police Central Bureau of Investigation have dug out more than 400 shells from World War II in the woods near Różan (Mazowieckie Voivodship). Someone must have been trying to recover the remaining TNT from these unexploded ordnance (UXOs). 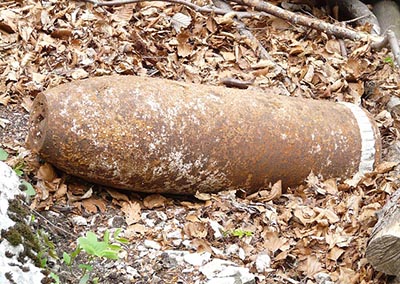 Someone has been playing with fire there

The UXOs contained more than 200 kg explosives, including TNT. As the police established, based on what they found, this impressive arsenal could have been a source of illegal explosives.

The total of 412 shells, including 322 mortar grenades and 90 projectiles, were secured by the police officers in the woods near Różan, – said the spokeswoman for the Police Central Bureau of Investigation, Commissioner Agnieszka Hamelusz. – The arsenal comes from World War II, – she added. – The ammunition was secured and transported to the Sapper Patrol of the II Pułk Inżynieryjny (2. Engineering Regiment) of the Polish Army, – explained Hamelusz.

The police discovered the missiles while checking some anonymous information about illegal acquisition of explosives they received earlier.

It turned out that the shells were filled with high-explosive material weighing more than 203 kg altogether, – added Hamelusz.

Some of the missiles have already been damaged – detonators were unscrewed.

The ammunition was set off at a training battlefield. The police is now investigating if anyone was illegally extracting explosives there, and if yes – then why.

For photos of the discovered arsenal visit TVN’s website.