Gdynia plans its own Central Park

It is supposed to be a haven of greenery and a favourite resting place for Gdynia citizens. 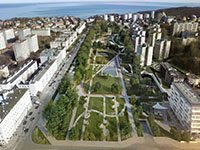 President of Gdynia Wojciech Szczurek has announced the creation of “Central Park”. First and foremost, it should be green and functional. In the heart of the city there will be pitches, ponds, running tracks, cafes and an underground parking lot.

I believe this will be the place where we will catch a moment of respite in the daily rush – says the president of Gdynia, who has officially presented the visualisation of the new park.

As soon as in three years, by the Marshal Józef Piłsudski avenue, there will be a new Central Park. As the town hall boasts, it is a huge, multifunctional investment that will effectively change unused areas in the heart of the city.

New Yorkers love the iconic Central Park, located in the heart of the city. Such places are famous in many European cities, such as Paris or Milan. I hope that soon Gdynia will gain a similar space – dreams president Szczurek.

He plans that in the park, in beautiful natural surroundings, you will be able to drink coffee, read a book or simply lie on the grass.

This will be a place for whole families, where fans of some more active forms of spending their free time will not complain about boredom either – announces the president of Gdynia.

Designers naturally divided the park into three zones: silence, leisure and recreation. It is for everyone to find something for themselves regardless of age or interests. It is known that in the heart of the green area there will be a pond, and around it seats, a footbridge, or a playground.

There will also be cafes and other food outlets. City authorities have also provided something for jogging lovers. Around the park there will be an 800-metre running track and an 850-metre skating track. During winter it will turn into a slide for the little ones.

Everything will be surrounded by beautiful plants, which in the Gdynia park are supposed to play the most important part. Although the municipality does not forget about its motorised citizens. Underneath the park, there will be an underground parking lot with exit to Świętojańska street and parking spots for almost 300 cars.

The whole investment is to cost 35 mln zloty.