On Friday, heavy rainfall is forecasted in the southern regions of Poland. As a result, water levels in rivers are rising, and local flooding is possible. 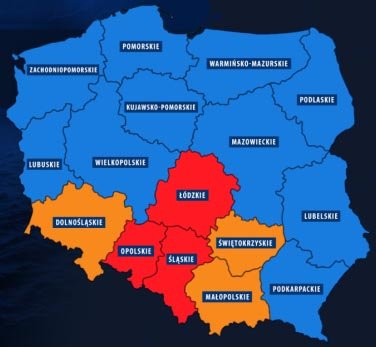 In the south of the country meteorologists have announced another wave of intense rain. This may cause flooding.

In the Łódzkie voivodship in the Pilica catchment area, a 3rd degree alert has been issued until Sunday morning. In Śląskie, in the catchment area of ​​the Upper Odra, there is also a 3rd degree alert valid until noon. In Chałupki, the water level will exceed the warning state. Also in the Śląskie voivodship, an alert has been issued in the area of ​​the Mała Wisła, Brynica, Przemsza and Soła catchments, as well as other smaller rivers in the voivodship. The warning is valid until Saturday morning.

In the Opolskie voivodship, a third degree alert has been issued in the catchment area of ​​the Odra tributaries. Due to the forecasted rainfall, the water levels might rise beyond the state of warning. The alert is valid until Friday evening.

In Małopolskie (in the catchment areas of Soła, Skawa, Raba, Dunajec, Ropa), until Saturday morning, there is a 2nd degree alert. In Cracow an increase of the water level is also forecasted. In Świętokrzyskie (in the catchment areas of Nida, Czarna Staszowska, Koprzywianka, Kamienna) the alert is valid until Friday evening. At points, it is possible that the water levels will exceed alarm levels.

In Dolnośląskie (in the catchment area of ​​the central Odra) largest increases of water levels are expected in Nysa Kłodzka and its tributaries. In Opolske (Upper Prosna), until Saturday morning, due to the occurrence and predicted precipitation, there is a 2nd degree warning for the Prosztyn River in Gorzów Śląski.

What do the warnings mean?

A first degree warning means that the water levels (observed or forecasted) are in the zone below the warning states, with a possible sudden increase.

A 2nd degree warning means that water levels (observed or forecasted) are in the zone above the warning states but below the alarm states.