Father and son arrested in Gdańsk for dealing drugs

More than 40kg of marijuana and hashish were confiscated by officers of the Police Central Investigation Bureau (CBŚP) of Gdańsk and of Gdynia Customs Chamber. 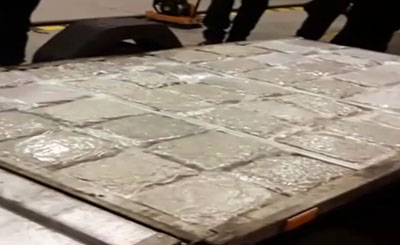 According to the police, the drugs were being smuggled from Spain, part of them in a double bottom of a car trailer. They have arrested three citizens of Gdańsk.

Gdańsk police officers from the CBŚP busted a gang importing drugs from Spain which were then sold on the Polish market. The group consisted of three residents of Gdańsk – 56-year-old Roman R., 47-year-old Piotr M. and his 20-year-old son Piotr M.

The officers have worked on this case for several months. They suspected that the dealers could have been importing the drugs with a car. The officers stopped them at the gates of A1 motorway in Rusocin.

In the trailer towed by the smugglers’ Mitsubishi, the officers found 22kg of marijuana, and in a travel bag of one of the detainees – more than 5 grams of cocaine. To search for drugs they used a hound and specialised X-ray equipment – announced CBŚP.

The police officers did not stop at searching the car. They also thoroughly searched the garage of one of the detainees. Inside they found 2.5kg of marijuana and more than 18kg of hashish. They also noticed electronic scales that could have been used for portioning the drugs.

The case has already been passed to the National Prosecutor’s Office. All three men have been charged with smuggling 21.48kg of marijuana to Poland from abroad and with participation in trade of narcotic drugs, by storing 18kg of hashish and 2.5kg of marijuana in a garage in Gdańsk.

The court granted the request for arrest for the three men. They face from 3 to 15 years imprisonment, fines, and possibly interest for the purposes of preventing and combating drug abuse, amounting to 50 thousand zloty.