The Polish movie “Smoleńsk” had its premiere last night. President Andrzej Duda, PiS chairman Jarosław Kaczyński and Prime Minister Beata Szydło were among the guests. However, some of the members of the victims’ families were not invited. 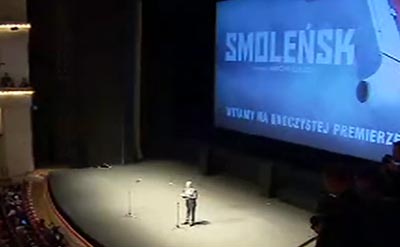 Smoleńsk in cinemas from Sept 9th

The premiere took place at the Grand Theatre-National Opera in Warsaw. Paweł Deresz, husband of PM Jolanta Szymanek-Deresz who died in the plane crash on April 10th, 2010, wrote on his Facebook: “I faced a terrible punishment (…) I’ll find out about the Warsaw premiere from Ms. Doda”. The Polish singer Doda was a guest of honour at the event.

President Andrzej Duda is the honorary patron over the film. The release in Polish cinemas is planned for September 9th.

It turned out, however, that not all representatives of the families of those who died were invited.

“I faced a terrible punishment. I was not invited (from the anti-Antek group I was not the only one) to the premiere of ‘Smoleńsk’. I will use the time to watch the BBC movie about Smoleńsk again, and tomorrow I’ll find all about the premiere from Ms. Doda, who is the guest of honour at the screening” – wrote Paweł Deresz on his Facebook wall.

Barbara Nowacka says she’s no longer surprised by the ruling party. She admits that she does not intend to see the movie, because it is a propaganda on political request.

Małgorzata Szmajdzińska says, in turn, that she expected such a decision.

I distance myself from these things, the more so that the movie is not shrouded in the best emotions – she adds.

She admits that it was more difficult for her when at the end of August, during the celebrations of the Polish Aviation and the 10th anniversary service of the F-16 in Poland, her husband’s name was omitted. Jerzy Szmajdziński, former National Defense Minister, together with his deputy, conducted a tender, signed and prepared the plan to introduce the F-16 in Poland.

The spokeswoman of Law and Justice party, Beata Mazurek, was questioned about the invitations.

We are not the organisers of the premiere, so it’s hard for me to respond to the allegations of Mr. Deresz and others. Please ask the organisers about the plan of sending invitations. Who they gave them to, and who they did not give them to – she said.

She admits that she also did not get an invitation.

For families it is always something symbolic, and it seems that the producer of the film, the organiser should take care of it. It is always a matter of choice, decision and decency – comments the head of the Civic Platform (PO) Grzegorz Schetyna.