“It was a second. I thought that if the train arrived, it would hit the man and kill him,” – reported Piotr, the hero driver.

The video recording made with his car camera shows how Piotr gets out of the car, runs to the man trapped between the barriers at the railway crossing in Sędzisław (Lower Silesia) and helps him get out. Piotr stressed that the guy was faltering because of the drank alcohol. 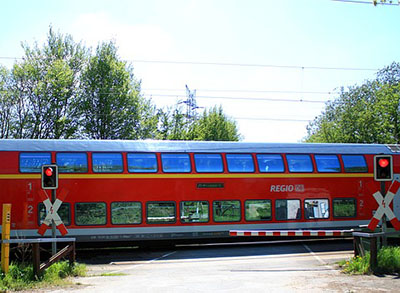 When I got to the crossing, the barriers were already lowered, the red lights were blinking, – said Piotr.

He noticed a guy walking around between the barriers.

The whole situation was recorded with his car camera. Several seconds after he stopped in front of the railway crossing, Piotr – the driver – got out of his car and ran towards the crossing. For video click here.

When I saw this man suddenly turning back towards the tracks, I decided to pull him out of there, – reported Piotr. – There is a wire netting next to the crossing, securing the place, so there was no other option but to push the guy under the barrier, – he explained. – It was a second. I thought that if the train arrived, it would hit the man and kill him.

Not responding to duty officer’s commands

Mirosław Siemieniec, spokesman for PKP PLK (Polish State Railways), explained that the duty traffic officer noticed the guy faltering around on the tracks.

Immediately the information was passed to the engine driver via radio, – he explained.

He added that the driver was warned to stay particularly cautious. Siemieniec also explained that the man, who was trapped at the railway crossing, did not respond to the traffic officer’s commands. Then the officer saw someone escorting the guy away from the tracks. It was Piotr saving the drunk man at the very last moment.