Car flips over and lands vertically – drunk driver gets out singing, wearing only underwear

On Tuesday morning, a car in Czechowice-Dziedzice (Silesian voivodeship) rolled over and landed on a flyover fence, standing vertically. The 26-year-old driver was completely drunk and wearing only underwear. 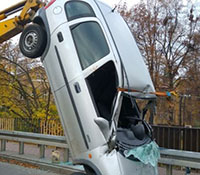 The car almost fell off the flyover

He left the car under his own steam. He was stopped by a police officer and two other drivers who witnessed the accident.
The man suffered some skull injuries, but nothing very serious. His life is not in danger, his wounds were dressed on the spot.

The man was apparently unaware what happened. He left the vehicle singing a song.

The firefighters who arrived soon afterwards, took care of the Opel Corsa. It was steadied with hydraulic support and then put onto a carriage.

The 26-year-old is facing a two-year prison sentence.