Bus and trolleybus drivers in Gdynia were asked to change their means of transportation for one day. The drivers had an occasion to try out the most dangerous and uncomfortable routes for cyclists. In this way, the city intends to improve road safety. 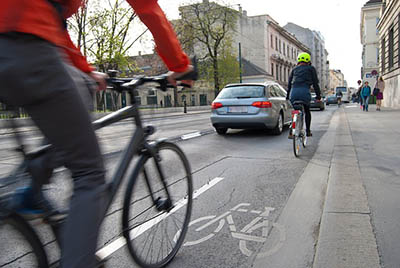 Cycling in the city may be dangerous.

Our aim was to make them realise how it is to be in cyclist’s shoes and why they are sometimes afraid. – explains Jakub Furkal, coordinator of the “Rowerowa Szkoła” (“Bike school”) campaign.

There is a never-ending war between cyclists and motorists on city streets, although dangerous situations aren’t usually the result of the aggressiveness of the sides of the conflict, but the result of lack of knowledge. Drivers are often not able to see everything what is happening on the streets from their seat. For that reason, the city of Gdynia has organised a training for their bus and trolleybus drivers run by cyclists.

“You just have to be careful”

According to some drivers, this test reminds the cycling exam, which Polish children can take at school.

I haven’t ridden a bike for at least ten years, so at first I had to learn again how to ride it. – says Zdzisław Dawidowski, one of the participants and a bus driver.

I benefited from this experiment a lot. We just have to be very, very, very careful. – adds Dariusz, another participant and a bus driver.

A thousand drivers on bikes

The city of Gdynia hopes to raise awareness among bus drivers and to make them understand that they need to leave enough space on the road for cyclists.

Each cyclist should have reflectors – says one of the drivers during a lesson.

I really liked their reactions, because they took this experience seriously and came into some conclusions. They said that they understood the situation of cyclists, but asked to “understand them as well”. – adds Furkal.

As Marek, a bus driver, points out, cyclists are sometimes “unpredictable”.

They join the road traffic suddenly from sidewalks. I keep away from them. The farther, the better! – he adds.

In the nearest future the city plans to train one thousand more drivers.