A young mother decided to breastfeed her child in one of the restaurants in Sopot. The waiter asked her to move farther away because other guests were complaining about the situation.

Both sides had tried mediation but it hadn’t brought any success. Then the woman took the restaurant’s owners to court and now expects them to apologise and pay 10,000 zloty compensation. The trial just started yesterday. 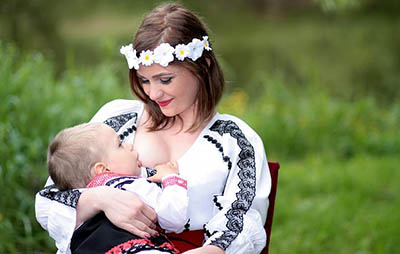 It’s a natural thing but not everyone enjoys watching it

In 2014, a young mother of a six-month baby, her husband and her sister went to a restaurant in Sopot. When they were eating, the child started crying from hunger. When the mother wanted to breastfeed her daughter, a waiter approached her and asked her not to do this in public and told her to go to a toilet instead, because the restaurant’s management did not want women breastfeeding in the main room.

The young mother and an organisation that is supporting her on this case demanded compensation of 10,000 zloty for emotional distress and an apology published in one of the local Tricity papers. She also wants the court to ask the European Court of Justice to interpret the applicable regulations and to determine whether breastfeeding in a restaurant is allowed or not.

I only started to unbutton my blouse. I had a shirt buttoned up to the neck. I wasn’t even given a chance, they didn’t let me start doing it to show them how I would do it. The waiter said I should go to the toilet. And I said no. So he asked me to follow him and showed me a chair next to the toilet. For me there was no such option. I will never feed my baby, never, ever, in the toilet or next to one. Since my daughter was crying, she was hungry, we had to leave the restaurant, – the mother explained the whole situation in court.

The restaurant’s owner presented a completely different point of view. He said he was the victim there. He ensured that the mother’s version does not reflect the truth, and his restaurant welcomes everybody. He claims that the lady started to breastfeed in the dining room. The waiter did not pay any attention to that until the guests sitting next to the family asked him to react.

It did not come from the restaurant nor the waiter. It was the guests’ request. The lady felt offended with this suggestion. The waiter did not see her to the toilet. As an alternative solution he showed her a chair that was not standing next to the toilet, but by the window. He suggested a chair, which was just one and a half metre away from the table. It wasn’t a command. He didn’t do anything to her. Then they finished their meal, though they claim they left, – said the restaurant’s owner.

The court has questioned the mother and her sister. The waiter is going to be questioned at the next hearing. The court has now to establish the facts but the whole affair seems to be a typical “word against word” situation.

The case has a double meaning. It is indeed word against word, but the legal proceedings in cases concerning discrimination always work in favour of people being discriminated. It’s the defendant who must prove that such action was justified by other factors. On the other hand, the procedure is a social matter. It’s about women in public spaces and their right to perform basic maternal activities like breastfeeding, – says Krzysztof Śmiszek, the chairman of the Polish Society of Anti-Discrimination Law, that supports the young mother in her fight.

The next hearing was scheduled for November, 9th.