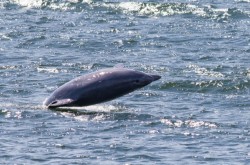 Bottlenose dolphin off the coast of Poland

First, news reached the Hel Marine Station on 8th August. Specialists from the Institute of Oceanography at the University of Gdańsk were informed that a bottlenose dolphin was seen near Hel, but there were no pictures to prove it.

We accepted the information with reserve, but waited for proof, eg. in the form of a similar report. Usually, as our experience told us, observations of such a group of cetaceans are multiple – informs the Marine Station.

Then, another message about dolphins came a few days later, this time from the Eastern shore of the Gulf of Gdańsk. Polish scientists received the infromation from Dr. Alexey Gushchin from Kaliningrad. The same two dolphins were also sighted on August 14 in the vicinity of Klaipeda (Lithuania). Researchers from the Lithuanian Sea Museum confirmed that the two animals were bottlenose dolphins. Earlier, in late July and early August, a pair of bottlenoses of the subspecies Tursiops truncatus were observed off the east coast of Denmark.

SEE ALSO: Restauranter in Hel (Poland) wants to put seal on the menu

Dolphins are like people and are constantly looking for new areas to explore, they traveled here probably for food. The ecosystem of the Baltic Sea is, however, very young – it is only 30 thousand years old and so far the only species of whale that settled here was porpoise seven thousand years ago – explains Professor Krzysztof Skóra, head of the Marine Station in Hel. – Perhaps in 20 thousand years other cetaceans will live here, although it is not certain that it will be just bottlenose dolphins, but for example the white dolphins, which often appear in the Baltic Sea. The mere appearance of the dolphins does not mean, of course, that this is their habitat, it’s a bit like saying that man inhabits Mount Everest, because he appears there.

Bottlenose dolphins are among the most common and widely dispersed species of dolphins. They live in groups of about 10 individuals off coast, and up to 25 in the ocean. There are also single animals, and groups of several hundred members as well, eg. in the tropical Pacific region. Just like porpoises they are protected by the provisions of the EU Habitats Directive and the Bonn Convention and its ASCOBANS agreement. The greatest threat to their lives are gill nets and underwater noise.

The last time bottlenose dolphins were sighted in the area of ​​our coast was in the late nineteenth century.