A bailiff of Łukowa, Southwest Poland, while seizing possessions of an auto-mechanic debtor, seized vehicles the mechanic was servicing as well, including two fire engines belonging to local government municipalities. 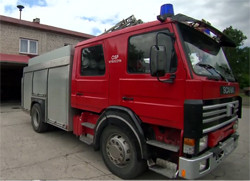 One of the seized trucks.

When you send your truck down to the mechanic for some maintenance, you don’t expect it to be impounded, right? That’s what happened. What’s worse, the Fire Houses that own the trucks have to go to great lengths to prove they own them in order to get them back, even when their names are painted on the side. 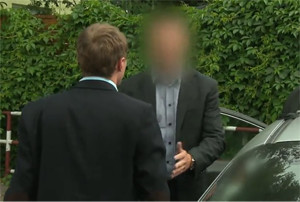 Journalists confront the bailiff just before he flees

Bailiffs are entitled to seize items without having to prove ownership first. However it might seem obvious to many people that an auto mechanic would not be the owner of two fire trucks.

Reporters have been attempting to interview the bailiff in question, reports are that when confronted, he “flees”.

Jerzy Garlicki, Mayor of Platerów expressed surprise that the bailiff would seize something that does not belong to the debtor. “How do you take something that is not secured against a debt?”.

It’s understood that the two volunteer units are coping so far without the trucks.