Dozens of headlines of the world shouted out in unison. Abortion drone to drop DIY drugs over Poland to women said the Telegraph. Women’s rights campaigners plot drone flight to scatter abortion pills over Catholic Poland screamed the Mirror.

Hats off to Reuters who did not get sucked into the publicity stunt. Yesterday, the actual “drone drop” was little more than a radio controlled quadrocopter with two pill boxes attached. 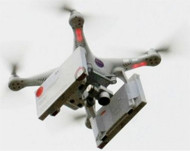 Catholics call it “drone of death”

Even the stock images chosen in advance of the “drone fleet” were entertaining in that every different website chose a different stock image of what they thought the drones might look like. Squinting at the photo we reckon this drone was a DJI Phantom II, which start at €549.

We must give credit to the Women On Waves group (W.O.W), for the price of a radio controlled gadget and two boxes of abortion pills, they managed to whip the world’s press into a frenzy and garner massive media coverage. Googling “abortion drone Poland” brings up more than 25 pages of news links.

Many jumped to conclusions, including one blog that proudly proclaimed “drones”, plural, allowing readers to imagine a fleet of military grade drones deployed, flying with laser sharp targeting accuracy over the long distances to Wrocław, Poznan, or even Warsaw, dumping huge payloads of thousands of pills. Egged on by reading “first drone flight” from the W.O.W. press releases, implying more to come, they extrapolated to plural. Clever W.O.W.

We speculate that there may never be a second flight, as it’s more efficient by a ratio of about 200:1 to put the pills into a car and drive over the (open) border, slipping a couple of cases of nice German beer and a few tasty Würst.
Besides, with drones costing what they do it really is cheaper just to drive over.

But where is the publicity, or the fun, in doing that.

“The German police confiscated the drone controllers and personal iPads.
The packets of pills can be seen taped to the sides of the drone .. They pressed criminal charges but it is totally unclear on what grounds.”

We’d like to know what the criminal charges actually were, to further understand the democratic process.

The Catholic daily newspaper “Nasz Dziennik” joined in the media hysteria, probably inadvertenly helping out their opponents with yet more publicity, describing the drone as the “drone of death” and drawing tired associations with Nazi Germany, quoting that “During the Nazi occupation Germany proposed destroying Poland by promoting abortion and contraception”.
Yes contraception and abortion pills, as we all know it’s right up there with Nazi concentration camps.

Whatever your religion or beliefs on the matter, 50,000 back street abortions per year in Poland can generally be agreed as “not a good thing”. So if nothing else, W.O.W. have done some good to put the issue on the table.