MP Cezary Tomczyk has addressed the Police Chief Commander to obtain information on the number of police officers securing the monthly Smoleńsk commemorative celebrations and the estimated costs incurred by the police for this purpose. 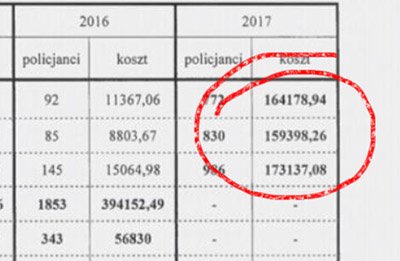 Since the plane crash of April 10, 2010, where 96 people, including president Lech Kaczyński and his wife, lost their lives, the PiS party and now the government have been organising commemorative celebrations in front of the Presidential Palace in Warsaw on every 10th of the month.

Several times already we’ve had quite scandalous information about the involvement of the public services in the monthly Smoleńsk celebrations (miesięcznica) – said deputy Tomczyk, asked why he went to the police on the matter.

In his opinion, “the public should know how much it costs the taxpayers.” He added that in his opinion, the monthly Smoleńsk celebrations are more “political rallies” in which the services are involved.

According to Tomczyk’s Twitter, the police response shows that the monthly Smoleńsk celebrations in January 2015 were secured by 89 police officers, which cost 8,021 zloty. In January 2017, there were 772 policemen securing the monthly celebrations, which incurred 164,178 zloty.

In the response from the Chief Police Officer you can read that for every monthly celebrations in 2017 a minimum of 150 thousand zloty has been spent.

In comparison, three Smoleńsk monthlys in the beginning of 2016 cost the police a total of 35 thousand zloty (over 320 policemen). January, February and March celebrations this year were over 496,000 zloty (over 2580 cops). The costs are 14 times higher.

“Service involvement has increased,” commented Cezary Tomczyk. He also stated that two years ago the number of officers during the monthly Smoleńsk celebrations was enough to secure the event, and now it has increased tenfold. “That matters,” he added.