A 24-year-old man, who had both hands sewn back on by doctors from Kraków, feels good and can move his fingers. Rehabilitation now awaits him. 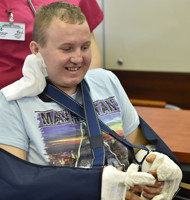 Sylwester Ordon happy to have his hands back

The operation was conducted in Kraków Specialist Rydygier Hospital on the night of November 16th to 17th. It was the first simultaneous replantation of both hands in Poland. The hands of the young man were severed by a machine cutting metal at the height of his wrists. Sylwester Ordon comes from a small village, Bogdałów-Kolonia, in the Wielkopolskie voivodship. It was the first day of his new job.

“I counted every minute”

It was a shock for us – the mother of the man – Dorota Ordon – recalls the accident. I wanted my son to get to the hospital as soon as possible, so there would still be enough time to stitch the hands back to his arms. I counted every minute. I’m very grateful to Doctor Karol Krajewski, who immediately decided to transport my son to the Transplantation Centre in Kraków.

“We had to fight against time, act quickly and accurately,” said Doctor Anna Chrapusta, head of the Department of Plastic and Reconstructive Surgery and Burns Department during a press conference. The whole surgery lasted 10 hours. Two teams of surgeons, anaesthesiologists, nurses and instrumentalists took part in the operation. All necassary tendons, arteries, veins and nerves have been fused.

“The next day I was able to move my fingers”

I feel good after the surgery. I could move my fingers the next day. I believed in success because I was told that this hospital is able to do this. I didn’t lose hope. I want to thank all the doctors and nurses who took care of me, I want to thank the whole hospital – says the patient.

Despite the fact that the patient is able to move his fingers, the doctors are cautious in their predictions.

Intensive rehabilitation will start in about five weeks – notes Doctor Chrapusta – After six months we will be able to say something more, especially when it comes to assessing the return of feeling – she adds.

It is probable that Sylwester will leave the hospital on Thursday.

Asked whether the surgery of both limbs transplantation has been conducted earlier in Poland, the doctor reminded that 27 years ago, a successful two feet replantation of 2.5-year-old was carried out by her friends doctors Maria and Tadeusz Łyczakowscy.

Great effort of the doctors

As reported by Doctor Chrapusta, as part of national on-call replantation in Kraków, approximately 90 replantation and revascularisation of the upper limbs were conducted only in 2014. She adds that the doctors – who are actually volunteers – do not have support of any institution, neither the National Health Fund (NFZ), nor the Ministry. No government institution, despite constant requests, has been interested in the situation of the Centre. All replantation centers face the same problem – nobody pays them for the patient they cure during their emergency time.